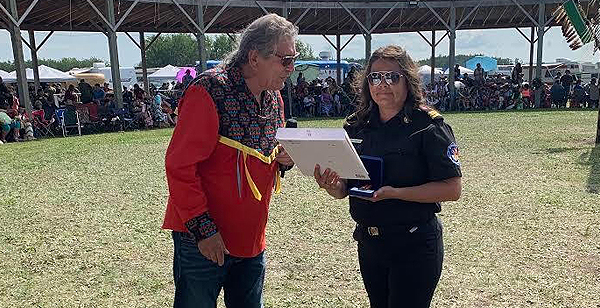 A woman from the Muskoday First Nation has become the first female president of the Aboriginal Firefighters Association of Canada (AFAC). Michelle Vandevord was elected as the AFAC president in August after serving as the organization’s Saskatchewan representative.

“Becoming president was actually a huge surprise,” Vandevord said. “I was just so proud. It's still very new to me and I'm still learning.”

One of Vandevord’s main goals as the association’s president is to inspire more females to become firefighters.

“I'm just being a role model and showing that girls can do this,” Vandevord said. “I'm starting to see now how it's benefiting the organization and First Nations girls across our country to see a female rise to the highest level in Canada for fire service. It's always for the girls for me and making sure they have a place in the fire service.”

Vandevord joined the Muskoday Volunteer Fire Department over 20 years ago and was the department's first female captain.

“There were no girls in the department when I joined,” she said. “I felt like I really had to prove myself more than the boys did but I'm grateful for that now. I was the first girl who had actually attempted to join in many years. It's not just a boy’s club like it used to be. I have three daughters at home so it's very important to me to show them that they could do anything or be anything they want to be.”

Vandevord is currently focusing on promoting Indigenous firefighting across Canada and educating property owners and students at schools about preventing fires.

“There's a lot of ways that a person can help with fire prevention like doing home fire inspections and catching fire hazards before they become a problem,” Vandevord said. “I’ve gained the respect of my fellow firefighters. I’m getting input from people across Canada on the services they'd like to see on reserves.”

“I believe my voice has really helped,” Vandevord said. “We really need more support on reserves for fires like bringing programs to our First Nation communities. I'm really proud of our First Nations coming together and learning from each other and supporting each other.”