New centre for families with young children opens in LLRIB

A new centre aimed for families with young children in a northern Saskatchewan community is officially opened. On December 18, 2019, the Government of Saskatchewan officially opened the new nisto ihtāwina Early Years Family Resource Centre in La Ronge. The centre is aimed for families with young children to access supports, programming and resources at no cost. 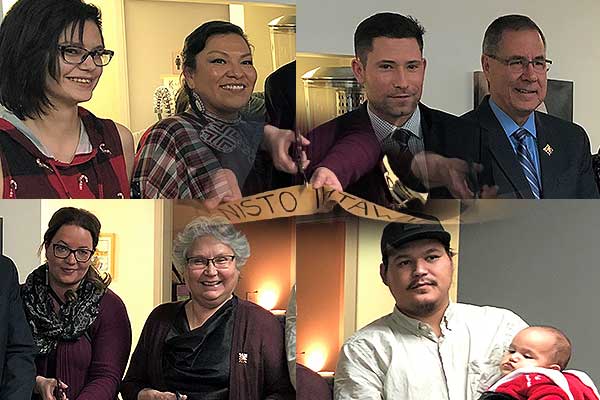 LG Russ Mirasty opened nisto ihtāwina which is a new family resource centre located in LLRIB. This centre is aimed for families with young children to access supports, programming and resources at no cost. Photo supplied

As a member of the Lac La Ronge Indian Band (LLRIB), Lieutenant Governor Russ Mirasty participated in the grand opening ceremonies and has seen firsthand how offering a single location where young families in the La Ronge area can access flexible programming and services will strengthen the community.

“I want to congratulate the local management committee members and others in the community who have worked very hard to complete the centre in time for this grand opening,” said Mirasty said in a media release. “I’m grateful to the Governments of Canada and Saskatchewan for investing in children through this and the other family centres in the province. When we support children early in life, in their home communities, it sets them up for success in the educational system and in every aspect of their lives.”

According to the prepared statement, Deputy Premier and Education Minister Gordon Wyant said the centre is a practical way of offering support to families during their children’s crucial early years of development and growth.

“Our government is pleased to be able to contribute to and support the creation of this new resource centre specifically designed for families in the La Ronge area,” stated Wyant.

Early Years Family Resource Centres operate with the goal of providing a single location where area families with young children can access reliable information, supports and programming at no cost. This past spring, $1.5 million in funding was announced through the Canada-Saskatchewan Early Learning and Child Care Agreement to create seven new Early Years Family Resource Centres in The Battlefords, Meadow Lake, Moose Jaw, Nipawin, Prince Albert, Saskatoon and La Ronge. nisto ihtāwina in La Ronge is the first to open its doors.

“We are extremely thankful for the contributions from our funding partners to make this centre a reality,” KidsFirst North Program Manager Rebecca Galloway said.  “It will no doubt have an immense impact on families in the tri-community area.”

The Centre name is Cree for 3 Communities - referring to La Ronge, Air Ronge, and the Lac la Ronge Indian Band.