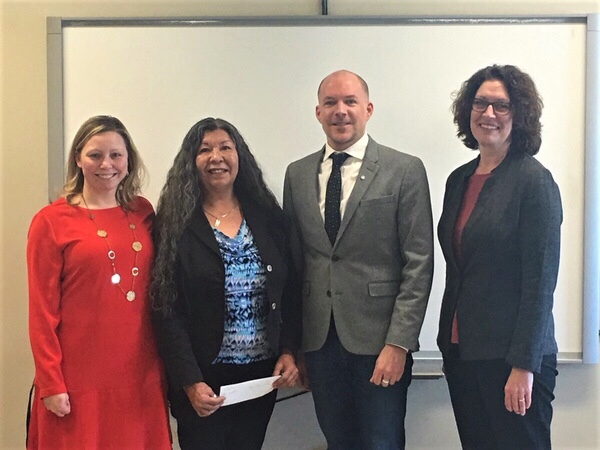 “We must build a more inclusive economy, and one way to help achieve that goal is to ensure the next generation of Indigenous leaders get involved in economic development-related careers in the Saskatoon Region,” said Alex Fallon, President and CEO of SREDA in a media release. “The SREDA Indigenous Economic Development Scholarship helps current students to become future leaders and we’re proud to be a part of this initiative with Great Plains College and SFNEDN.”

Aubichon of English River First Nation, has been involved in Indigenous economic development since a very young age helping her father run his businesses. After a short time working at a northern mine site, she returned to school to pursue her passion for administration and economic development – first with a Business Administration diploma from Saskatchewan Polytechnic followed by a Bachelor of Commerce degree from the University of Saskatchewan and her current enrolment in the MBA program.

Throughout her career she has held positions with Saskatoon Tribal Council, advising First Nations individuals on career development and labour force participation, she has participated as a board member to the Council for the Advancement of Native Development Officers and was a part of the founding group for the Saskatchewan First Nation Economic Development Network. She currently serves on the board of directors for the Des Nedhe Development Corporation of English River First Nation.

“We’re honoured to again present this scholarship to a very deserving candidate who is active in her community, is passionate about First Nations economic development, and continues to push herself to grow through higher education opportunities,” said Carrie Voysey, Director of development and communications at Great Plains College. “Melvina has already had a great impact on the communities and organizations she’s been involved with, and we look forward to seeing that impact grow as she completes the MBA program.”

When she is completed her studies, Aubichon’s goal is to engage more employers and industries in meaningful, long-term employment opportunities for Indigenous people, particularly in northern Saskatchewan.