Op-ed: Dig deep: there are lots of opportunities in mining

I have been around mining my whole life. Dad worked at one and I have spent the better part of the last fifteen years doing Indigenous awareness seminars with my buddy Winston McLean working with mining companies, potash and uranium. Collectively we have been on over a dozen mine sites across the province and underground in a few of them. 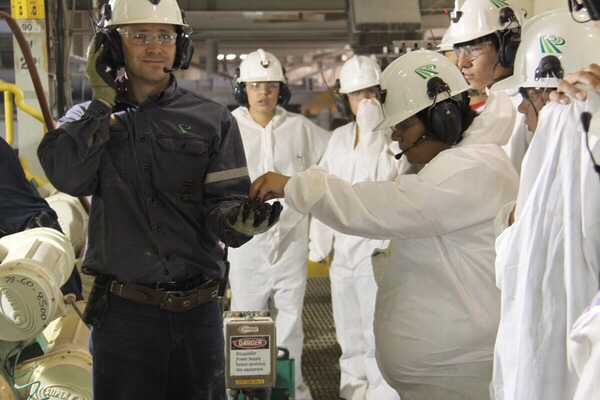 More and more Indigenous people are finding employment in the potash sector. The major mining companies are investing into youth programs and scholarships to ensure the next generation of miners are ready. This young mine tour participant took home enough potash to fertilize the family garden. Photo by John Lagimodiere

Seeing as how it is Mining Week in May, it is a good time to share some observances of mining experiences from a travelled and wise consultant.

Nutrien’s Rocanville mine and Oranos Cluff Lake mine site are over 1200 kilometers apart. Do not drive it.

Uranium mines are damp. Damp and have water dripping in places. And not that warm. And they drill up into the roof. And these are all camp jobs. I only spent three nights each time I went up for training, but in those three days I gained pounds. The food they supply was really good and very plentiful. There was no hunger in that camp. To counter, that they had excellent gym and workout facilities and a person to motivate you and organize all kinds of activities. Some camps have boats at the nearby lake you can use to catch a walleye. And Texas hold em. Lots of that.

Potash mines are 28 degrees Celsius all the time, bone dry and extremely dusty. The first few times I came up from underground tours I felt nauseous from all the salt I ingested. This explains the giant thermoses of ice water that each miner takes down the hoist every day.

You can lick potash. Uranium not so much.

Riding in the hoist is the only unsettling part of going for a mine tour. Going a long way down. No view. Dark.

I once saw a grade 12 student that was taking a tour ask if she could take a piece of potash with her as a memento. The supervisor said sure no problem. On the bus going back to town the girl shook a twenty pound chunk of potash out of the leg of her coveralls. Cripes.

Some people think doing seminars for miners would be tough because of the stereotypes people have of miners. But they are not like ‘that’ but you get the odd person sometimes, just like every other business we have worked with. Had a fella acting up at an awareness seminar at a mine. Wondering why we need this seminar and throwing down the usual stereotypical bluster….and his friend beside him snapped at him and said “We need this seminar because you keep saying crap like that now shut up and listen.” It was gold.

Also had an older fellow approach us after a seminar and express how mad he was at the education system and government for keeping him in the dark on our history. He explained that he spent years with built up resentments over nothing. He was truly upset. Also had one gentleman say that even though the government had a terrible plan and made all this damage, he said he was just as guilty. He votes. He elects these people and he let it happen and he owned that responsibility. Also had a guy this week after a seminar say he was embarrassed to be Canadian. There are lots of allies out there and many of them happen to be miners.

Being around mines has also impressed on me the importance of safety in the workplace. The companies and the employees take it very seriously and that mentality has certainly made me think through projects and actions in my own life much more thoroughly. These folks are also environmentally responsible. I haven’t met one person who worked at the mines that didn’t do their best to make sure the work they did and what the company does are to the highest environmental standards. Mistakes happen but they really do care.

We are seeing way more diversity in our classrooms. The number of women, visible minorities and Indigenous people employed has literally changed the face of mining in this province in the last decade.

And all of our associates that hire us to deliver these seminars are truly working to make their organizations better by engaging the Indigenous community and having us participate as employees, consultants and subcontractors just like everyone else in the province. Good jobs. Lots of opportunity. We all win and good for business. Just my thoughts.