Perry Bellegarde won’t seek another term as Chief of AFN 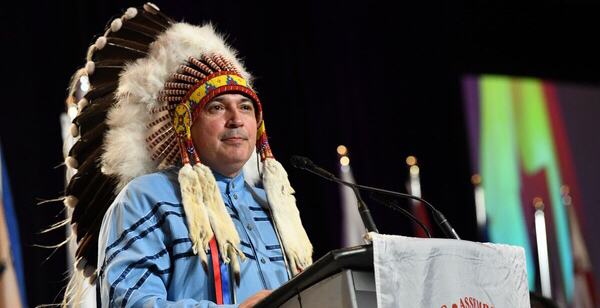 Assembly of First Nations (AFN) National Chief Perry Bellegarde wants to accomplish a couple more important goals before his second term ends in July and he passes the mantle to the next leader.

Bellegarde, who was first elected to the post in 2014 has announced he will not seek another term.

Instead, he is setting his focus, during his final six months, on influencing the federal budget to get more funding and resources for Indigenous communities.

He will also do all he can to see Bill C-15 affirmed as law in Canada. The bill, introduced earlier this month sets out a framework for the implementation of the United Nations Declaration on the Rights of Indigenous Peoples (UNDRIP). It requires Canada to ensure Canadian laws are consistent with the UNDRIP, and to make and implement an action plan to achieve the Declaration’s objectives.

Bellegarde, from the Little Black Bear First Nation on Treaty 4 territory in Saskatchewan, said his decision not to seek another term as the national chief comes after reflection on the AFN’s track record under his leadership.

Through working with politicians across Canada, Bellegarde said the AFN was able to advocate for bills and legislation like C-91, which creates an office for Indigenous languages in Canada, and C-92, child welfare legislation aimed at mitigating a loss of culture and connection to family for Indigenous children under government supervision.

The national chief also points to billions in funding over the last six years earmarked by the federal government for infrastructure spending on First Nations and the inquiry into missing and murdered Indigenous women and girls as progress under his watch.

“Those are some of the success stories that got into place by having a strong team and building allies and bridges with different parties in government,” Bellegarde said.

He said building relationships with politicians of every ideology and belief can be a difficult process, but it is necessary to bring about policy and legislative change to benefit Indigenous people in Canada.

Bellegarde has had to work with political leaders at every level in Canada in his role as the national chief, which began during the previous federal government led by Stephen Harper’s Conservative Party.

“(Governments) have a lot of power and authority and they come up with policies and laws that affect First Nations people in every province and territory,” Bellegarde said. “So you need to work with people and you need to work toward changes that respect inherent rights, title and jurisdiction and treaty rights.”

“We’ve definitely had a positive impact,” Bellegarde said. “Let’s focus our energies on this next six months to make sure that we finish strong and hard and continue to have a positive impact going forward.”

Bellegarde said after his work is done in the summer, he plans to spend time with his family back home before deciding on what he would like to do next.

“I’m sure I’ll continue to find ways to serve not only First Nations people, but this country called Canada in positive ways going forward.”