An installation aimed to educate visitors and staff at Regina’s City Hall on the commitment and journey towards Truth and Reconciliation was recently unveiled. On October 30, 2019, the City of Regina hosted an unveiling event where it featured Cree/Metis artist Krystle Pederson singing the Metis National Anthem, as well as Teddy Bison, a Nakoda/Cheyenne singer and drummer from Ocean Man First Nation. The Truth and Reconciliation project is located on the main floor of City Hall, next to the Courtyard Cafe. 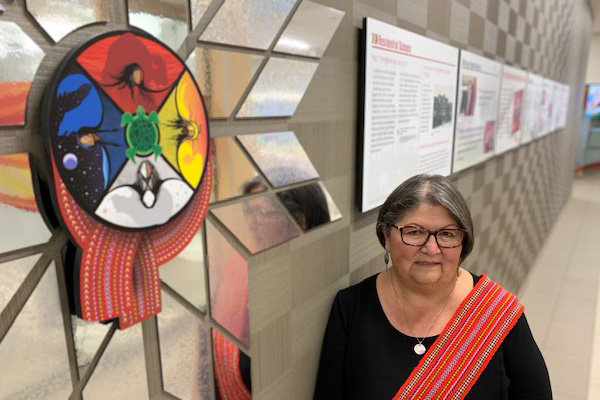 There are 14 panels that stretch 43 feet which is centred by a medicine wheel and star. Each panels integrates historical information on treaties and residential schools. Photos by Debbie Brotheridge

City of Regina’s Diversity & Inclusion Consultant Debbie Brotheridge came up with the concept of the installation after reading the Truth and Reconciliation Commission final summary report.

“I found that to be a quite hard read,” she said. “I would read a little bit [every few days] and absorb it.”

One of the first Reconciliation Regina meetings where all its members gathered had the late Elder Noel Starblanket present. He said something that resonated with Brotheridge.

“He said ‘once you seen and once you heard, you can’t unseen and you can’t unhear’,” she said. “It really hit me and made me think that’s exactly how I felt after reading [the TRC report]. I can’t just forget about it and I can’t let it go. If there’s anything that I can do about it, I needed to do something. I need to feel that I contributed somehow to work towards reconciliation.”

Shortly after, Brotheridge printed off some Office of the Treaty Commission (OTC) forms on ‘What Their Call to Action is.’ She went around the organization asking people to fill out the forms on what reconciliation meant to them and she received a lot of positive responses. She later placed the forms on the wall of the Human Resources room where it continued to grow. At the next Reconciliation Regina meetings, Brotheridge sat with a few executives at a table where she asked how they felt if she moved the forms to another area of the building. Her idea was approved to be moved into the cafeteria that was recently renovated.

“What a perfect place to display this and have people ask questions. I think the more curious you are, the more likely you’ll be working towards reconciliation,” she said.

Brotheridge and other staff had formed a committee where they consulted with Elders and had an agency to do artwork at the center of the wall. There are 14 panels that stretch 43 feet which is centred by a medicine wheel and star. The content of the panels integrates historical information on treaties and residential schools along with employee photos and written commitments to reconciliation.

“The support for Reconciliation Regina from organizations throughout the city shows us that our residents are keen to make progress on the TRC calls to action,” said Mayor Michael Fougere in a media release. “This installation will remind us of the good work that the City of Regina has been a part of, and inspire us every day to continue to make progress.”

The unveiling event had over a hundred people in attendance.