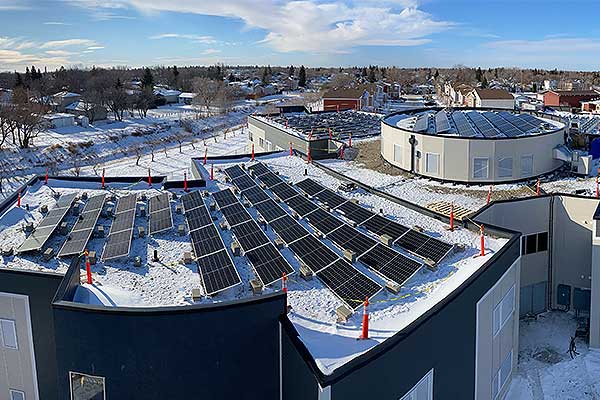 A newly introduced project was recently announced which will demonstrate the potential of renewable energy for training and also employment for First Nations people.

Silver Sage Holdings and miEnergy Solar hosted a launching event on February 5, 2020 at the pîsimokamik (Elders’ Sun Lodge) in Regina. This event celebrated the launch of a 300 panel, 110-kilowatt rooftop solar partnership – the largest institutional rooftop solar array in Regina, and one of the largest installations in Saskatchewan.

“Indigenous communities have always been leaders in advancing strategies focused on environmental sustainability and conservation,” said Silver Sage Holdings’ Board Chairman, Edmund Bellegarde in a media release. “There is a tremendous value-alignment between renewable energy projects and the needs and goals of Indigenous communities.”

Silver Sage will install solar panels on three Regina affordable housing developments, including the Sun Lodge. Silver Sage Holdings is financing the capital costs of the solar arrays. The Project has been supported by a $25,000 donation from miEnergy’s miCommunity Fund, along with help from SaskPower under the Province’s former Net Metering Rebate Program.

According to the prepared statement, Silver Sage’s CEO Maynard Sonntag stated that miEnergy has been very supportive of this goal and involved a number of Indigenous youth in the construction of the Project

“This partnership is a model for indigenous leadership in renewable energy and showcases the potential for renewable energy in contributing to housing affordability,” stated Sonntag. “With over 560 housing units in our portfolio, energy in one of our largest operational costs. These solar arrays have real potential to reduce our operational costs and in turn we will have more capacity to continue to offer affordable housing options at below median market rents. miEnergy has been a tremendous partner for us in designing and completing this Project.”

miEnergy Project coordinator Nathan Jones underscored the scope of the solar array including the reduction of carbon emissions.

“The Project is expected to produce approximately 135,000 kwh of power each year, or approximately 4.0 Megawatts of power over 30 years,” he stated. “This is the equivalent of approximately 5,120 MT of CO2 emissions or 720 households.”

David Anderson, Vice President for Business Development at miEnergy, emphasized the importance of working with indigenous partners: “We are very proud to work with Silver Sage Housing on this Project. The opportunity to contribute to a project that has so many benefits in terms of partnership, conservation, and housing affordability, is directly aligned with our business model, and also the goals of our miCommunity Fund.”

Anderson added the importance of the former SaskPower net metering program from a business case perspective, the Net Metering Program was an important incentive in helping make this Project economically viable.

Silver Sage has been working to advance affordable housing outcomes in Regina for Indigenous clients since 1983. As one of several affiliated service delivery entities of the File Hills Qu’Appelle Tribal Council (FHQTC) and Touchwood Agency Tribal Council (TATC) in Treaty 4 Saskatchewan, Silver Sage serves the off-reserve housing needs of 15-member First Nation communities and currently manages a portfolio of over 560 total housing units in Regina, Fort Qu’Appelle, and other Treaty 4 communities. Since 2012 alone, the organization has developed over 120 new housing units comprising approximately 300 beds, for a total capital investment in excess of $35 million

For nearly two decades, miEnergy has been the top choice among geothermal and solar panel companies, providing energy solutions for more than 1,700 residential and commercial clients in communities throughout Alberta, Saskatchewan and Manitoba.