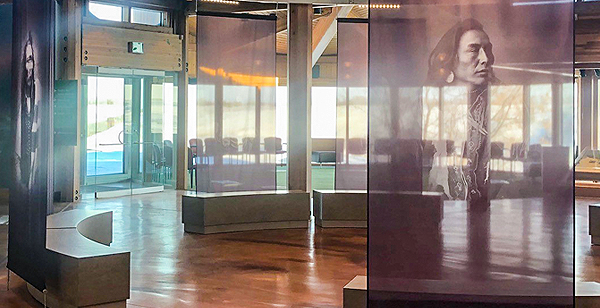 After three years of renovations and 15 years of planning, Wanuskewin Heritage Park has opened the doors to its newly finished cultural centre.

On December 5, Wanuskewin welcomed the first public guests to its new art galleries, gift shop, restaurant, event and conference spaces, and several state-of-the-art cultural exhibit spaces. The building has been expanded by about 50 per cent.

Prior to the public opening, Wanuskewin invited its Council of Elders to view and bless the space they helped create through their input and leadership.

“It's very much improved. There is power and energy when you're there. You can feel it when you're there,” said Elder Cyril Standing of Wahpeton Dakota Nation, who has been on the Elders council since 1985.

Standing said Wanuskewin will connect people of all backgrounds with the rich history of Indigenous people.

“It's a very sacred site,” he said. “It will give people an insight and knowledge on First Nations people, their lives, their history, their culture, and their spirituality. Hopefully it will incentivize people to do more research, because the more we share our history, the better the world will be.”

Standing also praised the new centre for incorporating space for elders – a room with a kitchen where they can gather for meal and ceremonies, and a larger space with a fire pit to gather and tell stories, he said.

Seeing the elders experience the new space for the first time made the years of work worthwhile, said director of marketing Andrew McDonald.

“To see the looks on their faces, we wanted to do right by them and make sure they were happy and that we incorporated their knowledge,” he said.

“Melvina Eagle, Elder from Whitecap Dakota First Nation, said something along the lines of, 'We have everything here now, everything we dreamed of.' That makes it a special moment.”

“It's not just a matter of reading placards in a museum. You're really engaged and immersed in these different stories and culture through language and oral history,” said McDonald.

Wanuskewin now also has a 350-person event space, which can be divided for social distancing or for smaller groups.

A family visiting Wanuskewin this winter can explore six kilometres of trails with free snow shoe rentals, then come inside where they can experience the safe and socially distanced exhibits and galleries, as well as programs taking place throughout the day, such as traditional dance performances or a guided walk, said McDonald.

But opening weekend looked a lot different than leaders at Wanuskewin had originally anticipated, said McDonald.

“We have so many incredible things to share with the public. And at times, we couldn't.”

The biggest challenge of COVID-19 was being unable to share significant events with the public as they expected. After Wanuskewin brought bison back to the park, the first calves were born on the land in over a century – an event the community should've been able to experience first hand, he said. Yet amidst the pandemic, the arrival of the baby bison took on a new meaning.

“The calves were like a beacon of hope. I think the bison were a wonderful outlet for people to see there is something positive happening, there is growth and change for the better.”

Plans for the park don't end with the completed renovations. The long process of applying for UNESCO World Heritage Site designation is still underway. Wanuskewin made UNESCO's tentative short list in 2017, but McDonald said they are still “years” away from receiving approval.

They will have a better estimate of the completion date after a review of the application with Parks Canada this summer.

McDonald said the process is expensive with a lot of politics involved, but he believes the park has a “very compelling case.”

“Just the same as the Great Barrier Reef in Australia, or the Rideau Canal in Ottawa, or the Pyramids in Egypt, we would be recognized on that same level, globally. As Wanuskewin has been a gathering place for 6,400 years for all nations of the Northern Plains, we feel strongly that we best tell that story of the Northern Plains Indigenous people. That is our proposal to the United Nations.”