Senator Elder Nora Cummings was recently inducted into the Women’s Hall of Fame for her continuous and lifetime contributions to the community. She was nominated based on her leadership, mentorship and citizenship. 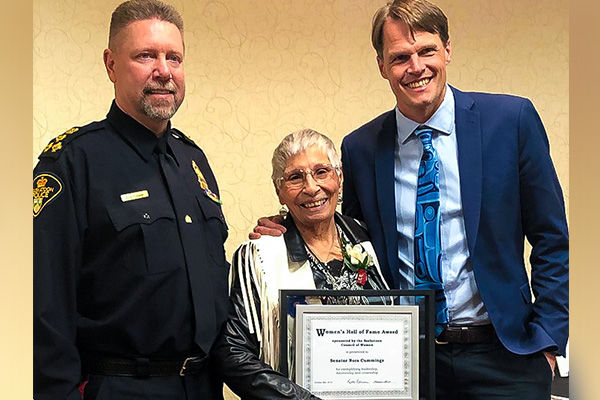 
Cummings was shocked to hear that she was given this incredible honour.

The induction event was held in October in Saskatoon. “The day of the event, it was the first time I ever felt nervous,” she said. “Just realizing that I had many awards and when I walked in, there was so many people there. The Mayor was there and the Chief of Police and people in our community. I was quite humbled to see so many people there supporting me and my family.”

Her list of lifetime achievements is long but goes unnoticed by so many. According to the Métis Family and Community Justice Services Saskatchewan Inc. website, Cummings became a founding member of the Saskatoon Métis Society Local #11 in 1969 followed by being a field worker for the Métis Society Local #11 until 1971. That same year, she became founder of the Saskatchewan Native Women’s Association and a year later, she was appointed Provincial Coordinator of the Association where she later was elected Provincial President.

Cummings sat on many boards such as the Board of Directors of the Native Women’s Association of Canada and the Saskatoon Indian and Métis Friendship Center and was later elected chairperson.

In 1993, Cummings took the Oath of Office, as a Senator for the Métis Nation Saskatchewan Senate, where she still remains. She has received an outstanding number of awards, medals and recognitions throughout her lifestyle and still lives a busy lifestyle to this day.

“Whatever comes up and I’m asked [to do something], I just do it,” she said. “After raising my kids, I never thought I would do the things that I have done.”

Cummings shares advice with other Indigenous women throughout the province to make the decisions that you want to make but in a good way.

“Continue to work for our people and your people and for other generations to come,” Cummings said. “Become great leaders and always respect your elders. Always remember your culture and be proud.”