The Saskatchewan Indian Institute of Technologies (SIIT) is amongst three institutions that recently joined a partnership aimed at making their campuses a safer place. 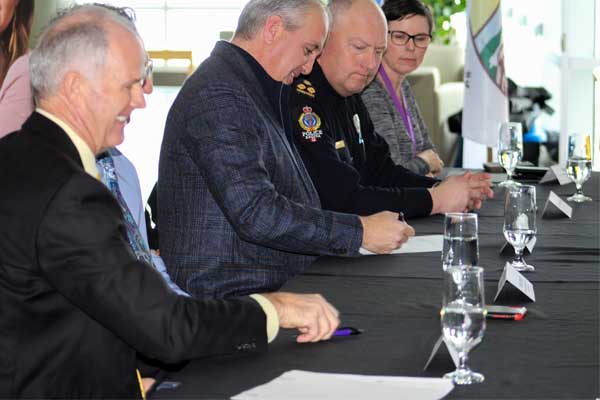 On January 23, 2020, a signing ceremony was held at the University of Regina’s (U of R) campus where SIIT, Saskatchewan Polytechnic and the U of R have joined in on to the Regina Human Service Partnership (RHSP) Community Violence Threat Risk Assessment & Support Protocol.

“It comes with a great deal of responsibility to ensure a good healthy and safe environment for our citizens [and] community,” said Riel Bellegarde, the CEO and President of SIIT. “[This signing ceremony] is very important for us [at SIIT]. We made a big priority to ensure that our staff and our learners are well prepared if there is a risk or a threat. We have to act timely, quickly and be responsible.”

The North American Center for Threat Assessment and Trauma Response (NACTATR) was established by J. Kevin Cameron who leads the school-based crisis team in Canada.

“In the early application of the model was very much me and the RCMP profilers developing the [Violence Threat Risk Assessment (VTRA) protocol] worried about other school shootings,” said Cameron, Executive Director, NACTATR. “The protocol is actually meant to address all forms of violence…with a signed agreement that gives us great latitude to collaborate with each other.”

The RHSP Community Violence Threat Assessment and Support Protocol was signed in April of 2017 by various Regina agencies such as the Regina Public and Catholic school boards, the Government of Saskatchewan and City of Regina.

“The focus is on community safety,” said City of Regina Police Chief Evan Bray and Co-chair of the RHSP. “It’s about understanding one another and working together. Keep our city safe which is the vision of the Regina Police Service…there is a way to collectively work together to make our community safer. The Violence Threat Risk Assessment (VTRA) protocol does that. Having our post-secondary partners only solidifies something that is so essential and so important [at] keeping our communities safe, reducing victimizations and trauma.”

The Protocol will allow the partnered community organizations “to collaborate on planning, identifying risks and sharing information and resources addressing traumatic violence and conflict.”

“We’ve been working for a decade now under a practice that echoes this fairly closely in terms of our early intervention team,” said Dave Button, the U of R’s Vice-President (Administration), University of Regina. “Our need for preparedness seems to be greater and definitely our attention to it and our interests in being able to react is very strong here. We are pleased to join the partners so we can continue our own voyage of early intervention.”