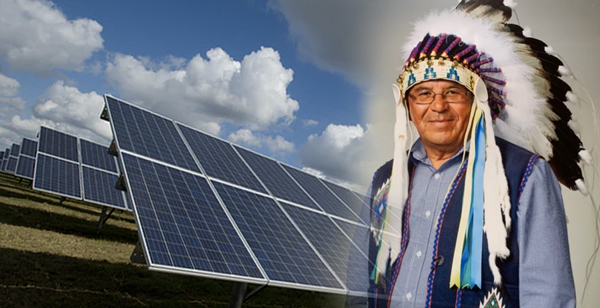 Muskoday First Nation Chief Herman Crain says that solar power in his community is a step on the path of economic self-sufficiency. Photo supplied

Three community buildings at Muskoday First Nation will soon be furnished with 190 kilowatts of solar power. The panels will be installed on the community's school, band hall, and fire hall and shop.

Muskoday will receive approximately $315,000 to buy the hardware and get a $210,000 loan for installation and implementation of solar power. Cowessess received approximately $633,000 in funding.

“The most important thing about this is, from our First Nation perspective, to care for the environment and Mother Earth. We all know the impacts of climate change and the detriment of greenhouse gas emissions,” said Randy Bear, Councillor at Muskoday First Nation.

“First Nations are always fond of saying 'We're the stewards of the Earth'. But this gives us an opportunity to walk the walk,” he said.

The new solar panels will supply about 40 percent of the power for each of the three buildings. Over the lifetime of the project, Muskoday will see a reduction of about 2,700 tonnes of greenhouse gas emissions, equivalent to about 1.2 million litres of gasoline.

They hope to begin construction on the project by the end of this January.

“We are committed to the path of sustainable economic self-sufficiency, and to carefully growing and managing our resources, balancing our choices on the best of what both modern knowledge and traditional ways have to offer,” Muskoday First Nation Chief Herman Crain said in a statement.

The solar project will be tied into the existing SaskPower three-phase grid at Muskoday, and will sell power back to SaskPower, creating revenue and employment for the First Nation.

Jonathan Wilkinson, Minister of Environment and Climate Change said in a statement that many First Nations communities are facing major impacts of a changing climate.

“This is why our Government is taking action to reduce emissions while supporting communities to transition to renewable energy, knowing that future generations will benefit from the clean growth economy,” he said.

This is just the beginning, said Bear, who hopes that now that Muskoday has their 'foot in the door', more clean energy projects will be in the First Nation's near future.

“Our ex-Chief, Austin Bear, who was Chief for 28 years, mentioned to me when he was getting ready for retirement: look into solar power. So, this is like continuing his vision,” said Bear.