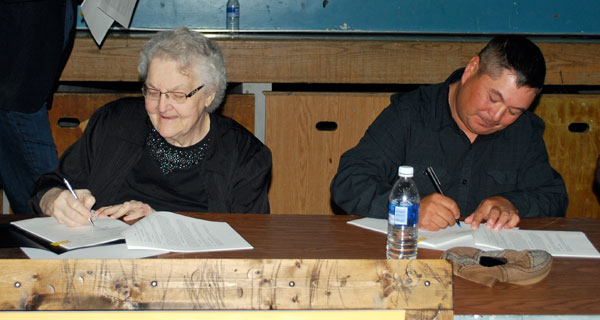 The agreement has a number of goals including increasing local participation in the industry, bolstering company investment in the community and providing job-training opportunities for community members.  A skills database will be created which will advise both Southend and Cameco of particular areas where job training is required.

Local councillor and Peter Ballantyne Cree Nation Vice-Chief Simon Jobb says another major part of the agreement is Cameco funding for three local people per year to receive technical training at Northlands College in La Ronge. “One of the most positive things here is there is automatic seats that we are going to have through Northlands College for Southend that are going to be taken care of by Cameco,” he says. “So, we’ll get our people educated and going out into the field.”

Cameco director of corporate responsibility Sean Willy says the company has done a fairly good job of getting northern Aboriginal people into entry level jobs but they want to see a more representative workforce at all levels. “Our challenge now is to move those current employees down the employment pipeline to really the professional, the technical, the trades and the supervisory roles,” he says.

Darren Morin, one of a group of local people who spearheaded the idea of signing an agreement with Cameco a few years ago, says he hopes it is only the first of many similar agreements with other companies to come. “I believe this project won’t be stopping here because there are other companies that as a community we have to start tackling,” he says.

A community referendum was recently held on the agreement which received a majority mandate to move forward.

Neither side is releasing financial details of the agreement at this time.

Southend is located about 220 kilometres northeast of La Ronge.