Stonechild moves from policing to FSIN 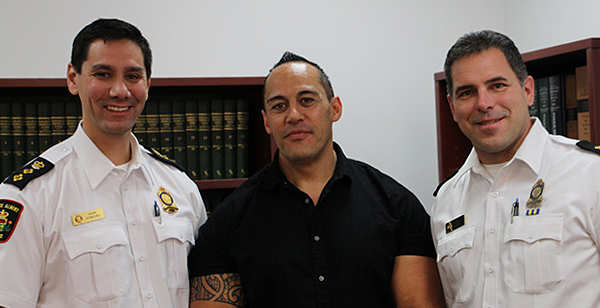 Jason Stonechild when he was named Deputy Chief of the Prince Albert Police Service in 2018. Photo supplied

After 27 years of service, Deputy Chief Jason Stonechild has retired from the Prince Albert Police Service (PAPS) and will join the Federation of Sovereign Indigenous Nations (FSIN) as its new  Director of Justice and Special Investigations Unit.

Stonechild, from Muscowpetung Saulteaux Nation, began his new role at FSIN this week, and said he couldn't be more excited about entering a new chapter of his career.

“I'm young enough and energetic enough to take the skills I've learned in law enforcement and use them for something that really inspires me. And the work FSIN does really inspires me,” Stonechild told Eagle Feather News.

Stonechild's path to law enforcement was somewhat of a happy accident. In the summer of 1993, at the time a 20-year-old Business Administration student at Saskatchewan Indian Institute of Technologies (SIIT), Stonechild decided to go a different direction than his peers with his summer practicum.  Stonechild found his way to the Prince Albert Police Service, who were running a First Nations Special Constable program. Interested in accounting and hoping to be involved with investigations, Stonechild was hired and worked the summer as a Special Constable.

He fell in love with the job, he said, and although returning to SIIT in the fall, applied to PAPS to become a full-time police officer. He was hired and started a career in law enforcement.

“I've always been a compassionate person, so that was a good first for the police service. I connected with the community right away.”

In 2018, Stonechild was named Deputy Chief of the PAPS, further engraining his voice and leadership in the police service with his community-first approach.

“I've grown to recognize the importance of community-based policing. In any part of the justice system, they should have the faith and trust of the community. And part of that is having a police service that reflects the community.”

With his new role at the FSIN, Stonechild said his experience with PAPS in everything from internal investigations to front line control work to community support services, will be valuable to the organization. He said he's looking forward to being an advocate and helping Indigenous people who have had negative experiences with the justice system.

“With nearly 30 years of experience, Mr. Stonechild will bring experience and fresh perspective on helping First Nations people and our communities,” said FSIN Vice Chief Dutch Lerat in a statement.

“(Stonechild) believes that Justice Reform is part of reconciliation and we are all very excited for him to join the FSIN team,” said Lerat.

In the weeks ahead, Stonechild said he will concentrate on getting up to speed in the vast number of operations that former Director of Justice Kelly Watson is leaving in his hands. But with so many issues in the province, Stonechild said he's eager to begin helping create change.

“Indigenous people are minorities of the population in Canada, but we are far over-represented as it pertains to victimization, criminalization, and incarceration. So, what does that tell me? Our people are suffering,” he said.

“It's not easily fixed but I'm excited to dive in and do my part to change things.”