In honour of 25 years of leadership, which has seen an almost unprecedented transformation of his First Nation, Chief Darcy Bear of Whitecap Dakota First Nation will be presenting the first ever scholarship in his name. 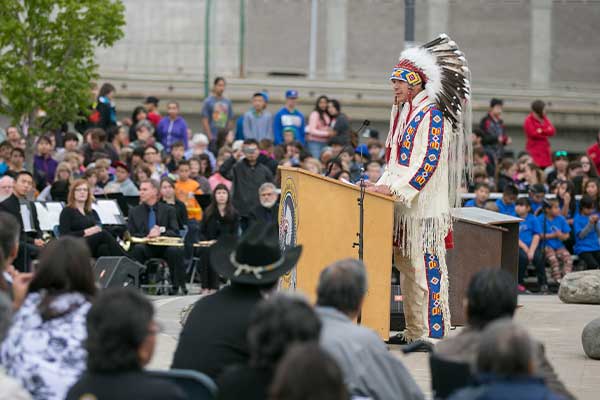 “It’s important to look for ways we can work with organizations to give something back to our youth,” Chief Bear told Eagle Feather News.

“We’re constantly promoting education at Whitecap,” he said. “Our people need to get the education and human resource skills they need to take up those opportunities. When our young people are working, it makes our nation stronger.”

“We thought, let’s do something that will live on. This scholarship, in Chief Bear’s honour, that will benefit the youth in his community – he thought this would be a great thing,” said Stephen Fay, BMO Head of Indigenous Banking.

“The better youth are equipped to deal with the world today, through education and training, the better they will be able to help their communities and move the needle on how nations are succeeding economically and culturally,” said Fay.

In addition to bettering young generations in an Indigenous community, Fay said that one of BMO’s motives is to provide an education for potential employment. BMO has a target Indigenous representation in their workforce of 1.6 percent, and it is currently at 1.2 percent.

“When we give out scholarships, we keep an eye on those kids because one day we might want to hire them,” he said.

Of course, opportunities for employment have dramatically risen at Whitecap Dakota since Bear became Chief in 1994. At the beginning of his tenure, unemployment rates on his First Nation were at 70 percent. Now, they are at five percent.

In the 25 years Bear has served as Chief, Whitecap Dakota has established a world-class golf course, casino, and have a robust community infrastructure including healthcare clinic, educational facilities, fire department, garbage and recycling pickup, to name a few.

“We’re taking our rightful place as Indigenous nations to be part of the economy. That’s the way it was before Europeans arrived, and that’s how it should be going forward,” said Bear.

Reflecting on his 25 years as Chief, it’s the simple things he uses to guide him in leadership.

“The biggest thing is having that ability to listen. Always be empathetic and strive to find solutions,” he said.

Very few leaders in Saskatchewan are more deserved to have a scholarship in their name. Even Bear’s peers look to him for his natural gifts as a leader.

“He’s able to push others, including myself,” said Fay. “He’s a true leader and is generous with what he has. He pushes you to be better.”