Earlier this week, Prime Minister Justin Trudeau announced that the Government of Canada has approved the Trans Mountain Expansion (TMX) and that every dollar the federal government earns from this project will be invested in Canada’s clean energy transition. 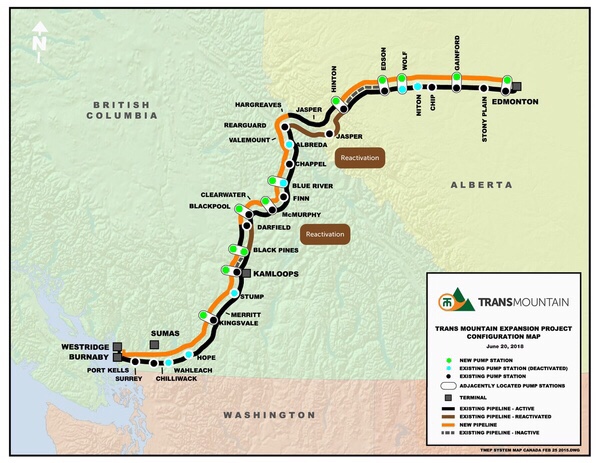 “We have a responsibility to ensure that the decisions we make today move us toward a cleaner, sustainable economy. Major resource projects can move forward, but only if we do so in a way that protects the environment and respects Indigenous rights,” said Prime Minister Trudeau. “The TMX project is a significant investment in Canadians and in Canada’s future that will create thousands of good, middle class jobs, maintain the highest environmental standards, and fund the clean energy solutions that Canada needs to stay competitive on the global stage.”

The decision brought many reactions on the federal government’s decision.

“I doubt his sincerity because he hasn’t actually done anything,” said Conservative Party leader Andrew Scheer. “Show me the pipeline. Where is it?...there wasn’t any doubt that [the] announcement wasn’t any news. We all knew he was going to approve it. What Canadians were hoping for was a clear timeline for construction to start.”

The NDP Party leader Jagmeet Singh reacted in a Tweet stating “a day after the Liberals declare a climate emergency, Trudeau approves the expansion of the Trans Mountain pipeline – a project directly threatening our environment.”

“It doesn’t have to be this way,” stated Singh. “We’ll continue to champion a plan that aggressively and honestly fights this crisis.”

“First Nations are not mere stakeholders. We are the rights and title holders and our rights, title and jurisdiction must be respected,” said Chief Bellegarde in a media release. “It’s clear First Nations have different positions on this project but they all stand firm that their rights be respected and their traditional territories be protected. Only First Nations can determine if those conditions are met. The government needs to engage fully with First Nations – to uphold rights and for the basis of good business.”

The Government of Canada committed to implementing the UN Declaration in 2010. The UN Declaration implementation act, Bill C-262, is currently in the Senate and is central to honouring that promise. National Chief Bellegarde, among others, have been urging this bill is passed before the end of the current parliamentary session to give life to the Declaration and to further enforce free, prior and informed consent as the basic standard of approaches to development.

“Implementing and enforcing free, prior and informed consent will ensure that governments, business and First Nations are onboard and onside before any development begins,” said Chief Bellegarde. “Implementing this basic international standard should not delay development. It’s a way forward and a way to better ensure economic certainty. Avoiding it actually creates economic instability for the country.”

However, others think differently about this decision.

Thomas Kequahtooway from the Sakimay First Nation said the TMX is an open door to Indigenous rights being trampled on.

“The poor consultations that deemed as consultations has no merit but only to expand what next is about to come,” said Kequahtooway. “I argue that Justin Trudeau is a poor leader who’s lacking vision for Indigenous rights rather he is doing it to better preserve his legacy and his father’s legacy as well. With that being said no wonder this country is so divided when it comes to these issues.”

Evan Gardypie from the Beardy’s and Okemasis Cree Nation responded by saying the chiefs are to blame for this decision going through.

“[They are] responsible for letting this go through, their pockets are full, yet laugh along side when it’s our children’s children we are fighting for,” said Gardyipe. “We still have another million years and more on this beautiful planet.”