Ancient peoples and the memory of stone 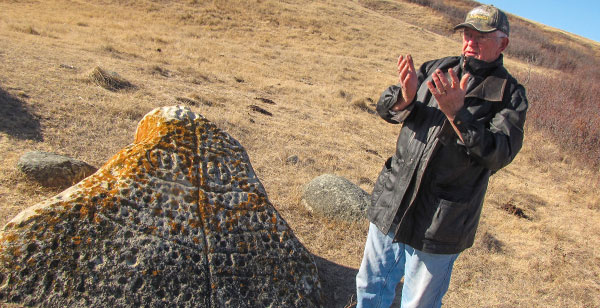 It was a hot summer day with blue sky and a pleasing breeze when I traveled with David Neufeld northwest of Rosetown to explore a prehistoric ceremonial site, along a valley west of Herschel. He has been a guide for over thirty years and I’ve known him from other excursions over the past twenty years. He was very knowledgeable and was most enthusiastic to share his considerable knowledge.

The monotony of the flat land changed when we came upon the Eagle Creek valley. The creek was much too small to have shaped such a broad valley. Rather it was made by the gouging torrent of a nameless ancient glacial river. It is a place of short grass prairie, mule deer, wolf willow, sage, prickly pear cactus, soaring hawks and the rare sighting of a golden eagle. Some boulders have patches worn smooth by buffalo rubbing over thousands of years.  A dusty gravel road leads to the valley floor where two valleys intersect at the hamlet of Herschel.

I have come to experience a ceremonial area constructed by ancient peoples some 1500 to 5000 years ago along a valley to the west of Herschel. Access is only available with a guide. Across the valley there are fossil beds. Fossils and the ceremonial sites speak to the memory of stone. A short walk off a grid road onto virgin prairie took us to the lip of the valley where we were greeted by two soaring golden eagles. It was a beautiful omen to know our approach was welcomed. I felt a familiar calm and feeling of peace indicating a spiritual balance.

There is a small meadow just below the crest of the valley. It is dominated by a white monolith of soft, easily carved stone facing east. Its vertical flat side, set at a tilt, is totally covered with petroglyphs and many strange circular cup-like indentions. I can visualize quite clearly how a ceremony coincided with the sun rise. The lines resemble the ribs and spine of a buffalo and there are four halved circles resembling hoofs. Most opinion states the monolith represents a buffalo and the boulder, when viewed at a certain angle, resembles the animal emerging from the earth. There is, interestingly enough, a Cree belief buffalo originally emerged from stone and there are also corresponding stories of buffalo herds disappearing into the earth with the prophecy there would come a time when they would emerge and once again walk upon the earth. I found it a peaceful meditative place, well deserving of an extended stay.

Above the ceremonial site along the lip of the valley there are other archaeology sites of spiritual significance. One is a shallow rectangular depression surrounded by stones. It is situated on top of a rise. I see it as a fasting site filled with sage pointing either to the sun rise or the sun set. I lay within the fasting bed and noticed it felt best looking toward the sun rise. It must have been amazing looking across such a vast vista deep in prayer, thirst and hunger toward the exact place of the sunrise. It was surely a brief sacred moment into the mystery of Creation.

There are also mysterious large stone circles forming a line leading to the valley edge. Some people believe the largest one is a turtle effigy. The presence of spirit does not ebb and flow amidst the ceremonial cluster but is ever present.

Dave told me other Aboriginal people have come here to investigate. These included delegations from the Cree, Blackfoot Confederacy, Crow and Atsina. The Crow believe certain symbols are in common with their people. Ceremonies have been held.

The ceremonial center is, without a doubt, the monolith. I was certainly drawn to it again and again. I sat with Dave Neufeld beside it and sang. When the songs ended, at that exact moment, the phone rang. I had to laugh. These quirky moments have happened before. Humour is an important part of ceremony, as strange as it may seem. I was once told people who can laugh together can pray together. I gave him the sisikwan (rattle) as a keepsake.