An annual event that helps families in Saskatoon with free backpacks filled with school supplies to kids has seen an increase compared to previous years. The Back-To-School carnival was held at the White Buffalo Youth Lodge where over 2,000 backpacks were handed out. 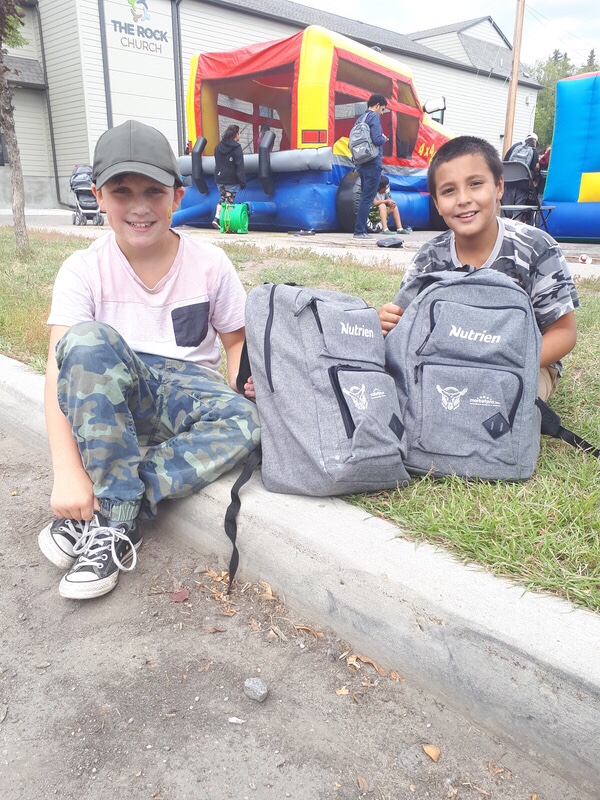 Two little boys were happy to receive their backpacks. Photo by Jeanelle Mandes

Shaylee Taniskishayinew, mother of four children, said it was her first time participating in the annual event and has heard about it through social media.

“I brought my kids out here to enjoy their day and to get their school supplies,” said Taniskishayinew, who is from the Yellowquill First Nation. “I’m very grateful and I feel happy that my kids have supplies to go to school. It means a lot to me…it’s a huge money saver which is a bonus. The children won’t feel left out.”

Taniskishayinaw said her kids enjoyed the fun filled activities, entertainment and free food that closed down two blocks on 20th street in front of the White Buffalo Youth Lodge.

“I liked everything like the bouncy castles, the face painting and the balloons. They did all this for the kids, they went out and beyond for the kids and I appreciate the organizers for that,” she said. “I will definitely be back again next year.”

The annual event was organized by the Saskatoon Tribal Council (STC) where they had many community partners who were involved. STC Tribal Chief Mark Arcand said they raised over $140,000 to get 2,500 backpacks ready for families that are in for an education.

“When I became vice-chief four years ago, I thought the investment has to be in our people to change our lives which is education,” he said. “We have too many incarcerated youth, men and women in jails, we have too many kids in child and family services. We need our people to be educated and employed, this is the best way to get a start. So, when the kids go to school, they feel like they belong in school and they don’t feel deterred if they don’t have the proper supplies.”

STC raised money through corporate sponsors such as Nutrien as their main sponsor.

Shane Curley, who is Nutrien’s VP of Procurement, engaged with the families by handing out backpacks to see their smiling faces.

“We have an expectation as Nutrien and we’re going to be involved and participate in the community. We want our suppliers and partners to do the same,” said Curley. “We provided the backpacks and our suppliers have provided all the materials to go in…it’s not about the cost for us. It’s about providing and giving back to the community.” 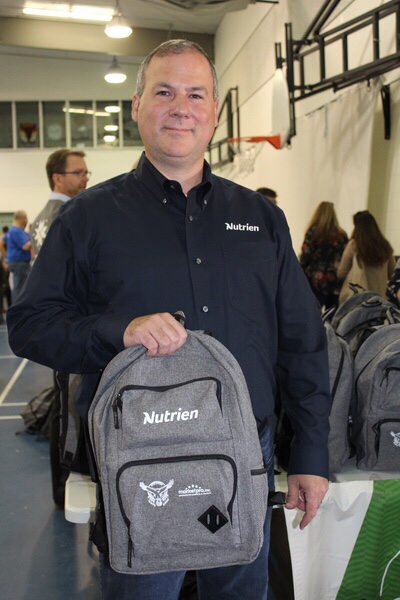 For Shane Curley, who is Nutrien’s VP of Procurement, the best part of handing out backpacks was seeing families’ smiling faces. Photo by Jeanelle Mandes

Curley said some people lined up for those who weren’t able to attend the event. That was the case for a young family who were making their way to the backpack event where an accident halted their destination.

Saskatoon Police Service Inspector Patrick Nogier and his partner were heading over to assist with the backpack event. It was then that they received a call by the dispatcher inquiring if they were heading to the event and had asked for a favour from the two officers.

“[The dispatcher] overheard a call where someone was reporting a car versus pedestrian accident. As it turned out, the pedestrians were trying to make their way to White Buffalo to participate in the backpack event,” said Nogier. “Luckily there was no major injuries…but they ended up heading home. The dispatcher was asking me to grab a backpack full of school items and to drop it off at the family’s house.”

When the two officers got to the event, it was a long line up and they knew it would take time to receive a backpack. Nogier noticed a young boy and he asked him if he wanted to make some money by grabbing a backpack and fill it with supplies. The boy happily agreed. When he was finished, the boy took the money and placed it inside the backpack for the family who was involved in the accident. It was a huge act of kindness that Nogier did not expect.

“We shook hands. We never really exchanged names or anything. He just had a smile on his face and he turned, walked away and didn’t ask for anything,” he said. “It was a really good day…when you open the paper, you don’t hear about the good things in life that’s going on. This is one of those examples.”

The backpack event was open to all families, Indigenous and non-Indigenous, who were in need of help to alleviate the costs.