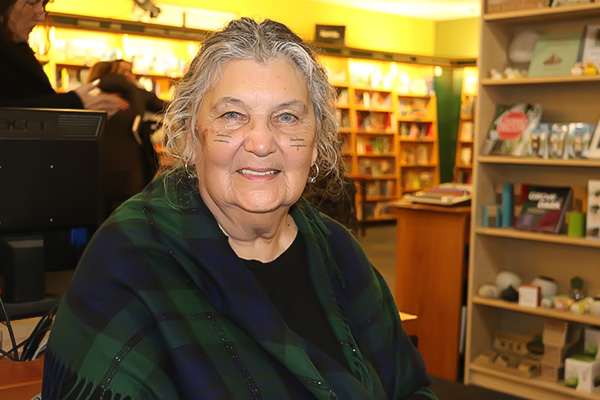 Maria Campbell, after signing and selling out all the copies of her newly reissued classic Halfbreed at McNally Robinson.

McNally Robinson Saskatoon was standing room only as Maria Campbell relaunched her classic, Halfbreed — this time with missing pages previously removed by her publisher at the last minute without telling her. The pages, recently discovered in some Ontario archives, detail Campbell’s rape at the hands of the RCMP as a teenager, in her family home.

“I wanted people to know it happened and still happens,” said Campbell, who has already received about 30 contacts from women her age and older, and some much younger, that have gone through the same thing. “It’s scary — what’s going to happen to your family if you start talking? You still don’t have protection.”

She shared the RCMP knew about those missing pages, and would follow her. One night while travelling on her book tour she entered her hotel room to find two RCMP officers waiting for her, who said they were “just letting you know we’re here if you need us.”

Despite intimidation tactics she was still vocal about the missing pages, so three years ago she was contacted by two women from Vancouver who asked if they could search for them. Campbell had been advised by her publisher to burn her own copies, which was bad advice: they were described to her by author W.O. Mitchell as “old age pension” because of the value of original manuscripts.

Campbell didn’t believe any copies existed, but when the researchers found one with red exes through the missing pages, it was very exciting. Her memoir has never gone out of print, but the publisher contacted her suggesting they reissue a new edition with the found pages. She was also able to add notes to the front and back, including a heartfelt thanks to her family and community — which she read aloud to the audience at McNally, after an hour of conversation with Marilyn Poitras.

Campbell said she doesn’t consider herself a writer but wrote because she had to, describing writing as a tool.

“I never started out to write my memoirs,” said Campbell, explaining it began as a journal or letter to herself. She says art, theatre and story are ways to create change and understanding, and make a difference.

The title of her famous work came about because “Halfbreed” was her nickname among the men she worked with in the Alberta Métis Association, and one of them told her jokingly she should call it that. She did — and nearly fifty years later, it’s still in print, a classic that is read and taught around the world.

She most of all hopes Halfbreed creates understanding and awareness about the Métis people, and that people delve further into Michif language, history and culture.