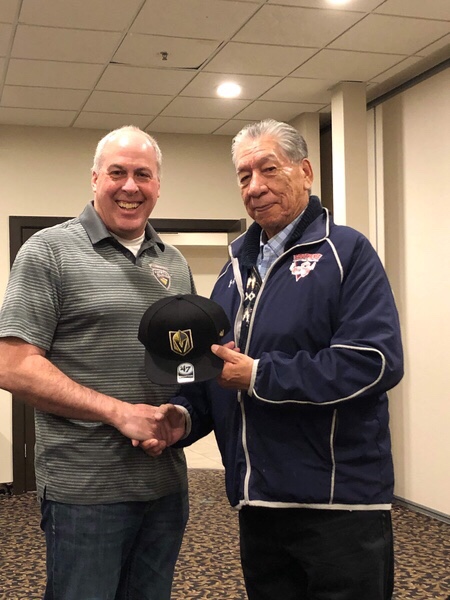 T4EA staff member David Riddle with former Chief of White Bear First Nation Brian Standingready who gave a session at the kickoff on Treaty Based and Inherent Rights to Education. Photo supplied.

The Treaty 4 Education Alliance (T4EA) had a kickoff event to the new school year for their teachers and staff to empower their students. On August 30th, members of the T4EA annual school kickoff held at the Delta hotel in Regina made this year’s theme based on “Empowering Nation Builders.”

Treaty 4 Education Alliance is an educational organization supporting on reserve education for 12 First Nations in the Treaty 4 Territory in Saskatchewan.

There were many different sessions that were held throughout the day that T4EA teachers, educational assistants and principals were able to choose from.

“We started off the day in school focus sessions and we asked the schools to talk about their own strengths and what they bring to their own communities,” said Megaen Reader, who is a student engagement consultant with T4EA. “We also asked them to identify the strengths within their communities. We wanted to start off the year in a positive way.”

The Regina Police Service also attended to present on providing information on the current gang situation in Saskatchewan. Classroom teachers were provided with information on how to recognize signs to look for indicating gang involvement/activity and resources for dealing with gang activity within their schools.

It was an excellent turnout and there was a buzz of excitement in the air when the event was over.

“For me, it was great to see everybody start off the school year in a positive way and understanding not only their kids have strengths and positives to build on, but they too are also bringing great things to the classrooms,” said Reader. “They have a lot of supports within their community. A lot of times, we focus on the negative or there’s so much negativity we see in the news or when we look at our schools’ data but this was a really positive way to start things off.”

On the day of the kickoff, they had a social media bingo that people participated in by using the hashtags: #T4EA and #empoweringnationbuilders.

The former Chief of White Bear First Nation, Brian Standingready, held a session and spoke about Inherent and Treaty Based Rights to Education and what it means to educators.