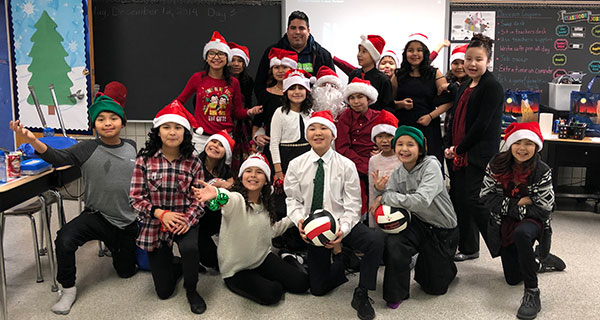 Students at the Father Porte Memorial School in Black Lake received gift packages from a group of about 10 companies who all contributed. The packages contained a mix of activities and were also provided with a book. Photo supplied

A group of 10 companies brought some unique Christmas cheer to the Athabasca communities this December.

“This is an event that we always look forward to,” said Michael Rodyniuk, CEO of West Wind Aviation in a media release. “West Wind has been a major sponsor of Christmas in the North since it started, and this year, we are thrilled to be able to provide a gift for every student in the Athabasca communities.”

“The team works hard to try and provide an assortment of activities that the kids will enjoy,” said Rodyniuk. “Along with two round trip flights for the schools to give away to community members in a draw, we also bring Santa along to help the group distribute the gifts on the day of the school Christmas concert.”

The combined value of all the contributions to Christmas in the north is $65,000.

The event has been running for the past 8 years. There was also an Athabasca student dinner which also ran for many years, where they had record attendance of 65 students and around 250 guests attended.  Transwest gave each of the students there a free round-trip home, plus 50% off the price of a ticket for one traveling companion.