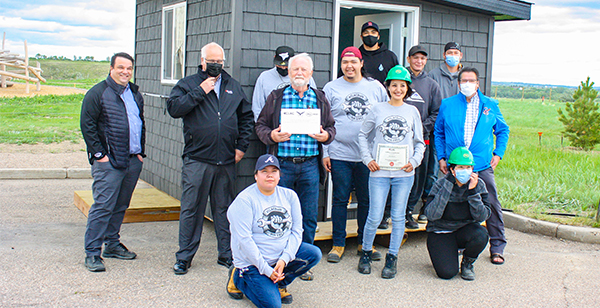 Graduates of the Carpentry and Concrete Forming program in front of the concession stand they built at Wanuskewin Heritage Park. Photo submitted

A group of students training in construction and concrete forming, finished their six-week course in a special way. With their newly acquired skills, the students built a permanent concession booth for Wanuskewin Heritage Park.

It was one of many rewards the students took from the program.

“You just added your own footprints to 6,400 years of history,” Phil Polsom, Director of Training at Christian Labour Association of Canada (CLAC) told the students.

The introduction to carpentry and concrete forming, gave five female and seven male Indigenous students the foundational tools and skills to get started in the construction industry. After completing the program the students will all get jobs at PCL Construction.

They were paid $12 per hour during training thanks to program funding from the Saskatoon Tribal Council.

“For too long, Indigenous youth have been left out of the construction trades. It's important for us to be able to help them find their place in the (industry),” said Polsom.

“Women in particular are extremely under-represented. We've committed to creating more opportunities and a better representation of women in trades,” he said.

One of those students, Leah Sewap, from Cumberland House Cree Nation, grew up working with her father on renovations in their home community. She has long wanted to become a carpentry journey-woman, but the right opportunity can be scarce.

“It's encouraging knowing we'll have jobs (at PCL after graduating) because it's really hard to find a job in this city,” said Sewap.

“It would be nice to see more women in trades, as well as more Indigenous people. As we're all in this program together, it's going to help a lot that we'll have support from people with the same background.”

The program has been a major steps in transforming Larua Brittain’s life. She is a recovering methamphetamine addict, who is six months clean. She says the program helped a lot in making positive changes in her life.

“I wanted to fill my day with activities, with doing something productive. I have all these barriers stopping me from going into things like healthcare, because of my record, but I still wanted to do something positive. This (program) keeps me busy, helps keep me sober, and makes me feel good about myself. It's built my confidence,” she said.

Not long ago, Brittain said she was homeless and living in poverty. While using substance she sometimes thought people were yelling emotionally abusive comments to her, which led to intense social anxiety.

She said she has worked hard to turn her life around, and thanks the CLAC program for its part in giving her hope.

“It's great knowing that once I complete the program, I won't just fall flat at the end of it. They will ensure I will find employment, to take what I've learned and live a happy, health life,” she said.

“I had three goals while I was actively using: sobriety, family, and independence. I feel like I'm now making the most of that.”