COPS graduate ready to take on challenge of policing career

Law enforcement may be considered one of the hardest jobs to do but recent Cadet Orientation Police Studies (COPS) graduate Savannah Fox is up for the challenge.

From the time she was a little girl, Fox has always had an interest in law enforcement. 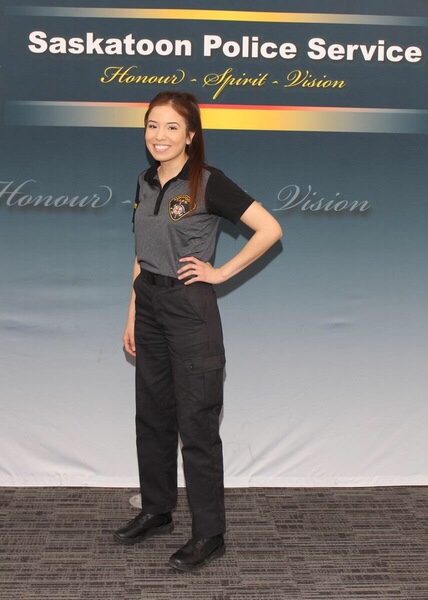 The experience in the COPS Program has led Savannah Fox to pursue a career in policing.

Throughout the program cadets got to do things such as shadow a police officer in a ride along and sit along in the different units. They also participated in miniature version of the Police Officers Physical ability test (POPAT), and did different drills.

There were presentations from the Saskatoon Police Service Explosive Disposal Unit, and from Major Crime Unit Staff Sergeant Vince Ashmeade. Participants were also given real life crime in the beginning to see if they could solve by end of the eight weeks.

“I gained an excellent, strong connection with multiple police officers in the Saskatoon Police Service through the COPS program,” said Fox. “A couple of police officers ask me ‘are you going to pick up an application on your way out?’ on the day of the COPS graduation,’” said Fox.

Drills was Fox’s favourite class because Constable Belanger gave her the opportunity to be the “right maker.” This means she was leader if Belanger wasn’t there. Fox was then responsible for making sure drill and uniforms were perfect, the department was respectable, and at times, discipling other cadets.

“I had to be somebody for everyone to look up to, and I was this because I already knew what drill was because of the training I received from air cadets for six years,” said Fox.

Fox worked so hard in the COPS program she graduated as valedictorian. She also received Certification of Completion from the COPS and at the Saskatoon Indian Metis Fellowship Centre graduation on June 15 she received the Community Justice and Policing Award.

“As soon as I entered the program, I wanted to put my foot in and give it my all every day. I had to show up. I couldn’t miss a day,” said Fox. “That motivation has brought me far because I got to be valedictorian and I think that was an amazing reward that I got to receive.”

In the fall, Fox will be attending Saskatchewan Polytechnic in Saskatoon for their Aboriginal Policing Preparation program and is then considering applying to the police academy.

Fox’s goal is to become a police officer not only because of her interests in law enforcement, but so she can be more involved in and serve her community and be a successful role model to other Indigenous women and youth.

She hopes to go into patrolling as it would then be something new every day.