Dealing with grief and loss through culture 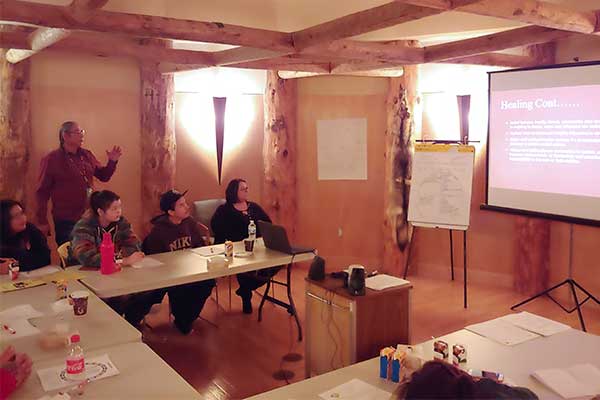 The two-day workshop, which was presented to the youth by White Raven Healing Centre (WRHC) in Fort Qu’Appelle, Sask., designed the workshop with a key emphasis on First Nations culture and spirituality.

“People haven’t really found their culture. They know a little bit, but they really don’t know what happened to our people,” said Whitecap, who is from Carry the Kettle Nakoda Nation.

According to Whitecap, understanding the historical trauma of First Nations peoples and the impact of colonization and residential schools is the first step to finding identity.

Whitecap, 58, spent 12 years of his life in Residential School and he says that it wasn’t until he turned 28 years old that he was able to find his spiritual identity as a First Nations person.

He says that identity plays an important role in healing from trauma.

“One of the things I ask them , what’s your background? They’ll say, ‘Cree or Nakoda or Saulteaux or Dakota’, and I ask them, ‘do you practice it or know anything about it?’ Probably 80 per cent don’t,” said Whitecap.

The first day of the workshop covered the historical trauma piece by looking at how then Santee Sioux were displaced as a result of European migration to North America.

Whitecap opened the conversation with workshop participants by talking about how traumatic events affect a person’s emotions.

“The main thing they need to understand is their emotions,” he said. “A lot of them hold them in, that sadness, that happiness…but I tell them be happy in the moment, be sad, it’s okay to cry.”

Starblanket First Nation member, Evan Pelletier, 30, was one of the participants and he said the workshop helped him understand the importance of culture.

“I realized that I can’t be holding in because eventually it gets me to where I don’t want to be,” said Pelletier.

Pelletier said that he’s had a lot of loss over the last 16 months including a five-month-old son, a mother and a grandmother.

Workshop’s like this and other programming from WRHC have helped him deal with his emotions revolving around grief and loss.

Andrew Pascal, 28, who was also a participant in the workshop said although he achieved a grade 12 education, he didn’t have many of the traditional teachings growing up on Pasqua First Nation.

“I didn’t know how to deal with , so I chose drugs and alcohol,” said Pascal.

Pascal, who said he lost his mother at a young age has also experienced the trauma of being incarcerated.

“I’m learning more about my culture ,” said Pascal. “I take it serious…and I do really believe it helps when we pray.”

The program is offered periodically throughout the year at WRHC in Fort Qu’Appelle, Sask., or for more information go to the File Hills Qu’Appelle Tribal Council website at www.fhqtc.com/white-raven/ .