A young man from the Whitebear First Nation was awarded a high school bursary to pursue a career in business and entrepreneurship. Jerico Lonechild, who recently graduated from Regina’s Scott Collegiate, did not expect to win this award.

“I was pretty surprised and excited because more blessings are coming my way,” he said.

Lonechild was accepted into the First Nation University of Canada (FNUniv) and will be starting classes in the fall. He was recently awarded the Thomas and Dana Benjoe Business and Entrepreneurship Award – a first of its kind at Scott Collegiate. 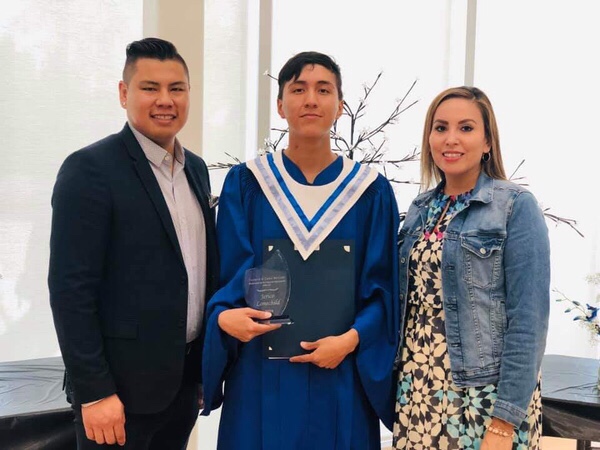 “As a commitment that Dana and I made, we said we would do a business and entrepreneurship scholarship,” said Benjoe, who is the President and CEO of FHQ Developments. “It’s going to be an annual thing so we would be supporting a $1,000 bursary for Indigenous students attending Scott Collegiate.”

Benjoe and his wife are both alumni of Scott Collegiate so they felt it was fitting to dedicate this award to their old high school located in Regina’s North Central. They specifically wanted to recognize Indigenous students who have a passion for a career in business or entrepreneurship.

“I think of my high school experience and you don’t hear a lot about scholarships or bursaries specifically targeted to business and entrepreneurship,” said Benjoe. “It’s exciting to get a student on their direct path to becoming future business students or going into a program related to entrepreneurship.”

The high school teachers provided recommendations to the Benjoe’s of certain students at Scott Collegiate who have the most drive or passion for careers in business and entrepreneurship. Their decision led to Lonechild who became interested in this field after taking an entrepreneurship class in high school. The idea of running his own business in the trades became clear to him that this is the path he wishes to pursue.

“I was open minded and I really wanted to get into business because it like a good opportunity,” said Lonechild.

He is saving his bursary winnings for when he soon becomes a post-secondary student. Lonechild said bursaries like the Thomas and Dana Benjoe Business and Entrepreneurship award is important for high school students to give them something to look forward to.

“It pushes to succeed,” he said. “Once they want to succeed, then they will do it themselves.”

Benjoe and his wife are not only hopeful that this bursary will spark more interest for high school Indigenous students to pursue a career in business and entrepreneurship but they hope that others may see this as an opportunity to create similar bursaries to give back to their communities.

“Hopefully, [this bursary] will encourage other people and leaders in the community to think about doing their own scholarships and bursaries for students,” he said. “It doesn’t take much to do that. When we think about the high number of high school graduates that we’re going to start to see, it’s nice for us to be able to provide some of that financial support…is going to be critical to their success.”