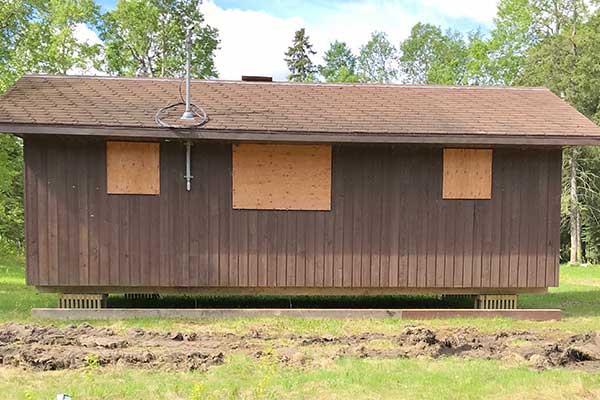 Chief Frank Roberts says the First Nation asked for the cabins to be donated to the community instead of the university demolishing them.

“We knew that they needed urgent housing for some of their community members,” said Wade Epp Associate Vice-President, Services at the University of Saskatchewan. “Meeting with Chief Frank Roberts, we came up with a way to have [the cabins] safely removed and found some housing for some people there.”

Chief Roberts says with the community’s borders closed many people have returned home to the community during the pandemic. Some future residents are living in the church until the cabins are available.

“It’s good that the University of Saskatchewan… wanted to help us out and we appreciated that,” said Chief Roberts.

The cabins were built in the mid-nineties and prior and vary from single to multiple room structures. Kenderdine campus has been closed since 2012 and the buildings have since been shuttered and monitored.

MLCN used their own moving company to move the structures 50 miles from Kenderdine campus near Emma lake to the community. The relocation of the buildings began in mid-April with three larger buildings yet to be moved. The community will hire a company outside of Prince Albert to move the last buildings due to their size.

“They took a very careful approach to the removal,” said Epp. “We identified a limited number of trees that would need to be removed used as light equipment as possible to really ensure we could work with the land as carefully as possible.”

Epp says a few structures which have historical value to the university will remain on the site including the original Kenderdine cabin as well as workshops and buildings with permanent foundations.

The relocation of the buildings has so far cost the community upwards of $60,000 plus another $10,000 per building to run sewer and gas lines and to winterize the homes.

Chief Roberts says the cabins are in good shape and structurally sound. He says individuals or small families will move into the cabins near the end of July. There are about 100 people on the waiting list. “It’s well worth it,” said Chief Roberts. “These are people that would be continuing to wait or wandering around or people that are right now in overcrowded housing, that’s the reality.

“We have close to three hundred units ... for each unit, there’s an average of six people and (in) some there are two families, three families living in a unit at one time.”

Receiving the cabins for the community of Montreal Lake Cree Nation has been a blessing, Chief Roberts said.

“I want to thank the University of Saskatchewan for the help they have given to our community and our members,” he said.