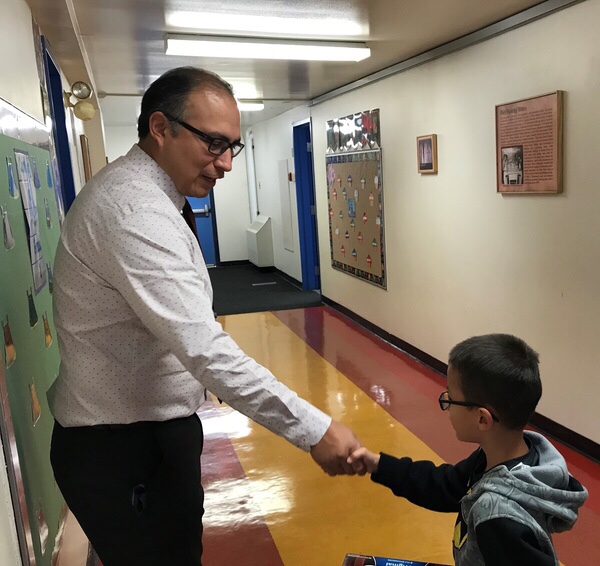 Jason Young grew up going to school in the Northern Lights School Division. Now he’s its Director of Education.

When Jason Young became the director of education at the Northern Lights School Division, he was closing the circle.

“I grew up going to school in a Northern Lights School Division school and I graduated from the same system,” said Young, a Swampy Cree from Cumberland House, whose home community is now the Lac La Ronge Indian Band. “I’ve had a lot of history in this school division.”

He spent about 10 years as a superintendent before he had the confidence to apply, Young said, but it was important for him to have someone Indigenous in the role, for him to be part of decolonization.

“Part of that process to give that voice back to Indigenous People,” he said.

“His love for our kids in the north is without question, it’s amazing,” he said.

When Young goes to any of the 18 communities throughout Saskatchewan’s north where the division has schools he is approached by the students, McCallum said. Kids will ask him about his history, and what he has overcome in his life.

“That’s where it becomes very easy to talk to him,” McCallum said. “I believe he is an absolute role model.”

Young is starting his second school year in this new role, and will mark his one-year anniversary later this fall, but it’s a job he has always known he wanted. When he was younger, Young said he wrote down some goals, which included first becoming a superintendent in the school division then becoming the director of education.

“The moral of the story is be careful what you write down because it might come to fruition,” he said.

He has many goals for the students in the division. Young said he wants to see an increase in attendance, literacy, numeracy, early-years learning, and graduation rates.

While he has a great team, Young acknowledges there are challenges to reaching all of their goals. One of these is the retention and recruitment of teachers.

For this school year the team worked to fill 83 vacant positions in the school division, but there are still 14 unfilled, he said. The school division is a massive operation with around 650 employees including 331 teaching staff, he said.

The school division also continues to provide support to the schools in La Loche after the school shooting in 2016.

Despite challenges, Young looks for the positives. He said he has noticed an increase in attendance, and looks forward to helping students transition into the work world as they graduate. He said the Northern Lights School Division is continuously building partnerships with employers and communities.

“We can’t do it alone. We need to work with others to help make our students successful,” he said.

“It’s very important because that’s part of our identity. So much of our history is imbedded in the language. If you don’t have the language it’s hard to feel that identity and cultural connectedness to a community to who you are, so it’s vital,” he said.

“I think if we can give kids the building blocks that they need, and the foundation that they need then they can have access to everything else in terms of cultural language acquisition and understanding.”

While Young calls his first year in the director role a steep learning curve, he is eager starting this year.

“There is so much we want to accomplish, it’s daunting no question, but I think when you view it as working together, having others involved, trusting your people, relying on others, and developing that trusting culture, I think we can make significant progress for sure.”