Almost every kid dreams of becoming a firefighter, and for 20 high school students that dream became a reality.

After talking it over with the guidance counselors at their school, students went through a paper and interview application process. These were grade 11 and 12 students and a few recent immigrants who had gone back to finish up their high school diploma. 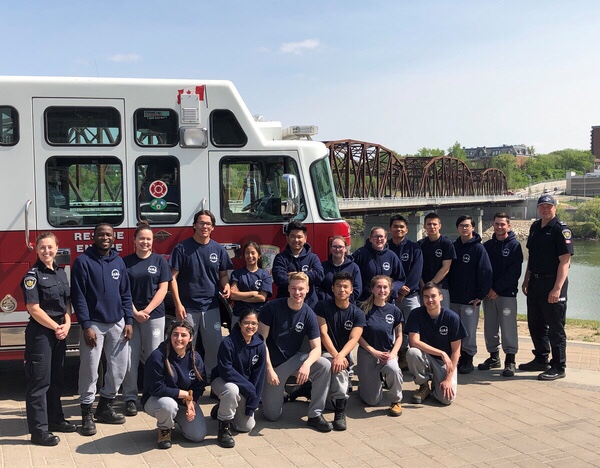 During an intense 13-week program, high school students from various schools across Saskatoon participated in the annual Firefighter Introduction Recruitment Experience (F.I.R.E.) Cadet Program, where they learned everything from CPR, how to operate the hoses, how to breach doors, and water safety. <Br> Photo courtesy of the Saskatoon Fire Department.

Kenton Beatty, who had been a firefighter with the Saskatoon Fire Department for 13 years, was one of this year's instructors.

He wanted to be an instructor see more of what the F.I.R.E Cadet Program was about but also to share his enjoyment of the profession with others.

“I was interested in it to see what it was all about but also to challenge myself. I wanted to see how the high school students would respond to the training, mostly because I think it is a great opportunity for them. I wish it would have been available to me when I was in high school. So, I think it was a rewarding experience,” said Beatty.

Garrett Pewapisconias, a recent graduate of Bethlehem Catholic High School, was one of this year’s cadets. Pewapisconias applied for the program after his teachers and counselors suggested it as he is a hands-on learner. “I thought it was a great opportunity to get outside of the classroom and experience a career I was looking into,” he said.

During the program, the cadets learned to operate fire hoses, fire trucks and specialized water rescue equipment. They also had technical ladder, extrication, firefighter self-rescue and water safety skills training. Participants received the CPR Level C certification. They also had to put together and then present a fire safety presentation to elementary schools.

Every Friday, they did community work such as working at the food bank, helping pick up needles, and things of the sorts. Pewapisconias enjoyed working and bonding with the fellow cadets but the repelling exercise was his favorite because of adrenaline rush that came with it.

The program has been going on for five years now, but it was Beatty’s first time teaching it and he was happy with how everyone did.

After an application and interview process and look at how they did as a cadet once the program was done, Saskatoon hired four of the cadets for the summer. They will be working fire prevention, maintenance, and community relations. Pewapisconias is one of the four staying on from July second to August 23.

“I had a very good time during the semester, and I wanted to continue it. It was a good opportunity to make some money and get on with the fire department,” he said.

Pewapisconias wants to go into firefighting as a career and is looking into more formal schooling.