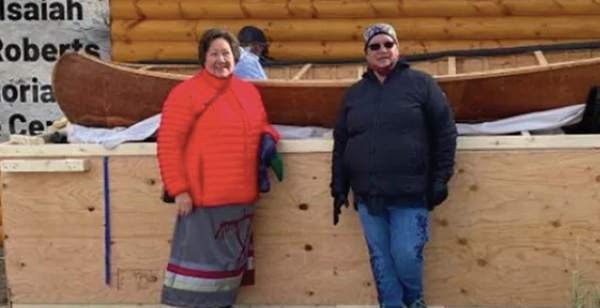 The return of a handmade Birch bark canoe was a dream come true for sisters Isabelle Hardlotte and Martha Kilcup. Nearly fifty years ago their grandfather, Isaiah Roberts, was commissioned to build a traditional birch bark canoe from scratch. The final measurements of the canoe were about three feet wide by twelve feet long. Though the canoe was a Roberts’ family hand-made original, technically it belonged to the organization who had commissioned it. Upon completion the canoe was shipped out to an unknown location. The sisters didn't know where it was. Until now.

In 1972, during a summer break from the Prince Albert Indian Student Residence, Hardlotte traveled with her family to Otter Lake. On the banks of Otter Lake, using materials found on the land, Hardlotte's grandparents Isaiah and Annie Roberts built a birch bark canoe by hand.

The process was captured by a film crew, who would use the footage as an educational tool for future generations. The documentary is entitled The Last Canoe.

In the film, a Cree-speaking Roberts shows the viewers how to build a birch bark canoe step-by-step.  Roberts' wife Annie can be seen working diligently alongside him.

Hardlotte fondly recalls that summer as a young child. She remembers helping her grandmother Annie pick the roots of spruce saplings that would be used to bind the canoe together, but she hadn't seen the documentary and they all wondered what happened to the canoe Through a social media family chat they began their search.

When the family located the documentary, they were transported through time back to the banks of Otter Lake. Kilcup says the film brought feelings of melancholy when she watched it.

“I couldn't believe I could see and hear them walking around right in front of me. I was also happy to see my dad who has since passed away. I was so excited saying 'Look it's dad!' It was just amazing,” she said.

When Hardlotte saw the documentary for the first time she had a similar experience.

“It was a good moment to see it, but it was also bittersweet in that my brother and I are actually the only two living people left that were in that video,” she said.

They searched far and wide for answers about the location of the birch bark canoe. They were told it had been sent to the Western Development Museum. When they called the museum to ask about it, they were told that it may have been donated to Moose Jaw. Moose Jaw staff didn’t know the location of the canoe. Their search finally led them to the University of Saskatchewan, where their other sister, Dr. Rose Roberts, was employed as an Education Development Specialist in the Gwenna Moss Centre for Teaching and Learning.

After a number of emails and inquiries about the canoe, Roberts learned that a birch bark canoe had been found in the basement of the Archaeology Building on campus, where it had been housed for at least forty years. After confirming it was the same canoe their grandfather had crafted, arrangements were made to have it carefully packed and shipped back to the family.

As of early December, the birch bark canoe has almost made its way home. It is on display at Grandmother's Bay on Otter Lake. Due to the fragility of the somewhat dilapidated canoe, it will remain there until next summer when it can be safely transported home to Stanley Mission to be displayed at the Isaiah Roberts Memorial Cultural Centre.

The documentary My Last Canoe in Cree can now be accessed via YouTube.