A grade 11 Pelican Narrows student was honoured with this year’s Lieutenant Governor’s Award of Excellence during this year’s northern tour. 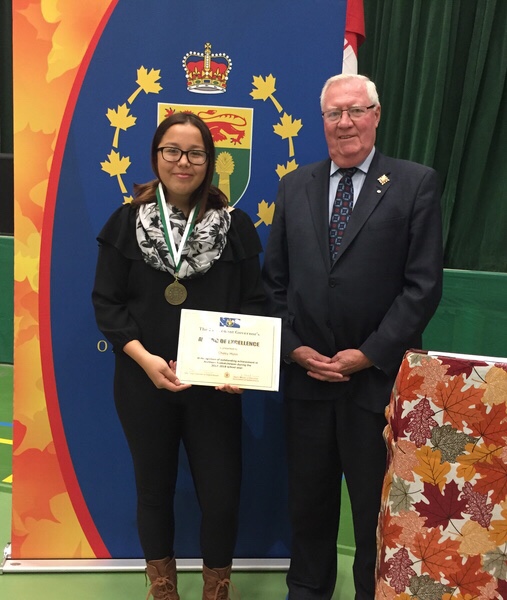 Chaley Morin (left) was presented with the Lieutenant Governor’s Award of Excellence from Thomas Molloy in Pelican Narrows. Photo supplied.

The Lieutenant Governor of Saskatchewan W. Thomas Molloy visited six Northern schools last week. He travelled to Creighton, Cumberland House, Stanley Mission, La Loche, Ile-a-la-Crosse and Pelican Narrows. During his travels, he presented the Northern Student Achievement Awards to the communities during the week of September 24th to September 27th.

The achievement awards were established in 1989 by the Saskatchewan Ministry of Education and the Lieutenant Governor’s Award of Excellence recognizes one student at each grade level from grade seven to 12. The award criteria is based on the student’s academic standing, school attendance, and involvement in cultural activities.

Sixteen-year-old Chaley Morin in grade 11 from Pelican Narrows was the lucky recipient of the Lieutenant Governor’s Award of Excellence.

“I felt very ecstatic and I couldn’t believe it until the day I received the award,” said Morin. “I was proud of myself and relieved. It’s amazing what you can accomplish if you put your mind into it and to believe in yourself.”

During the school year of 2017-18, Morin’s academic standing was 89.2, her attendance was excellent and she just loved to go camping with her family in the Trade Lake area where she helped pull nets, clean the fish, go duck hunting and cook outdoors.

It was a no brainer why she was chosen to receive this prestigious award.

“She was an excellent recipient for the award,” said Principal Susan Custer.

Morin’s teacher Cheryl Morin described her as a “a thinker, communicator, organized, and a leader.” [They] are incredibly proud of her accomplishment.

Currently Morin is extremely active in school, at home and in the community. She is described as being very competitive and enjoys being in the great outdoors in northern Saskatchewan.

“That’s why she's a member of the youth voyageur canoe team,” said her teacher. “She likes to compete and go canoeing.”

Morin also enjoys singing and dancing and has participated in the Northern Spirit Show Case for Children held in Prince Albert. She is described as a positive role model and was named a team leader in the “Leader in me team and Peer Group.” The group works together to create fun activities for other students. She also helps other students develop their own skills.

In the future, Morin plans to attend the University of Saskatchewan and to return home to help develop recreational programs to encourage people in her community to lead healthy lifestyles.