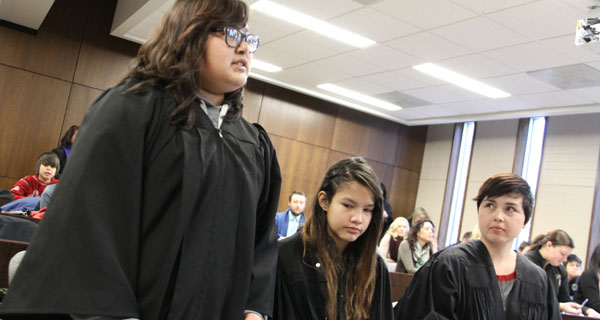 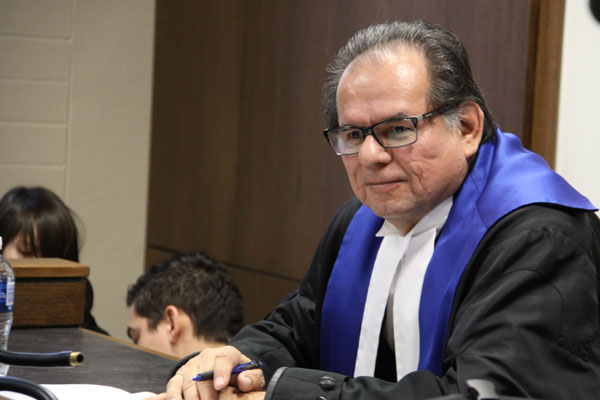 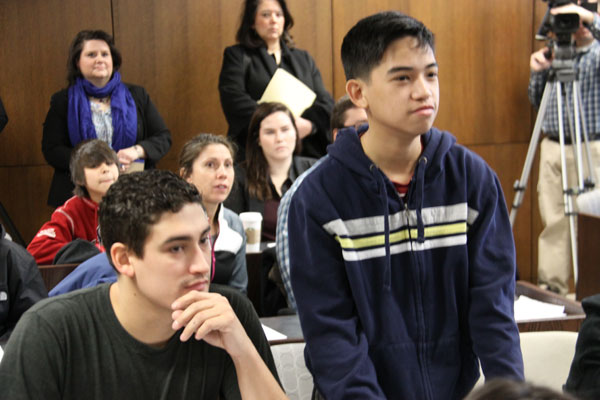 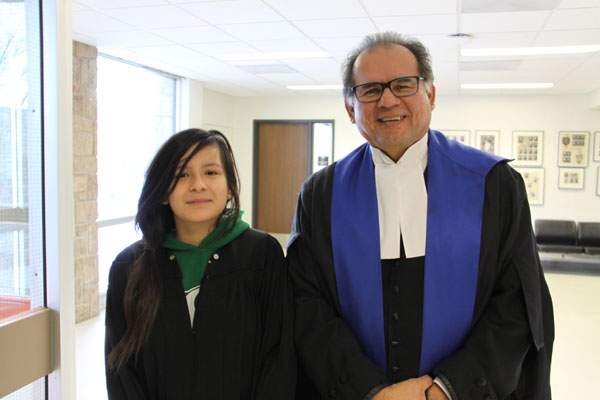 Let’s face it. Lots of Aboriginal kids wind up in court on the wrong side of the banister and are way over represented in correctional facilities. One strategy to divert young people from interacting in a negative way with these institutions is to teach them about the system. About 40 students from grades 6 to 8 at St. Frances School in Saskatoon recently had the opportunity to participate in a mock drug trafficking trial. It’s part of a program to help aboriginal students learn more about law and consider it as a future career.

The students began the Dare to Dream program in November, meeting weekly with University of Saskatchewan law students. After learning the basics of the Canadian legal system they started preparing for the mock trial that was to be presided over by provincial court Judge Gerald Morin, a Cree speaker from the Peter Ballantyne Cree Nation.

“It’s an empowering program for the students,” says Theresa Laroque, vice-principal at St. Frances. “It is inspiring some of them to pursue the field of law.”

During the trial, the elementary school students played various roles, including prosecutor, defence lawyer, juror and witness. Calista, a grade 6 student at St Frances was one of the defense lawyers. “The best part was getting to stand up and be the defense lawyer for the accused. I was a little bit nervous but got comfortable when I spoke,” said Calista as the jury was out pondering the fate of the accused drug dealer “Jamie Hendry” who was played by her fellow student Isagani. “I thought a long time ago that I wanted to be a lawyer and I know I need to get a great education. We practiced in the class a lot so I got used to it. It is something to try and do. It was fun.”

This is the first time Saskatchewan students have participated in Dare to Dream, which is organized by Canadian Lawyers Abroad, a group created by lawyers to improve lives in Canada and abroad. It is progress that Judge Morin is more than happy to see.

“I want to commend the organizers of this program. The Justice system is for all of us and for these students to have this type of exposure in a positive atmosphere is very valuable,” said Judge Morin. “I am thankful for the opportunity to be involved.”

Kelsey O’Brien is a lawyer with a year of practice under her belt. The law firm she works at, McKercher, allowed her to volunteer her time in the exercise. She had as much fun as the students. “I loved it. I loved working with the kids and I think it was fun for everyone. We got to show them something new,” she added.

Any progress on those fronts would be good news to Judge Morin. Originally from Peter Ballantyne Cree Nation, Morin always knew he was going to be a lawyer. When he first became a lawyer, there were only five First Nation lawyers across Canada. Now, he says, there are over a thousand. “It is so important to have our people understand this system and for the young students to see it in a positive light,” said Morin. “And the best part of this is how seriously the students were. You could tell they wanted to do a good job.”

And by the way, the jury found the defendant “Not Guilty.”