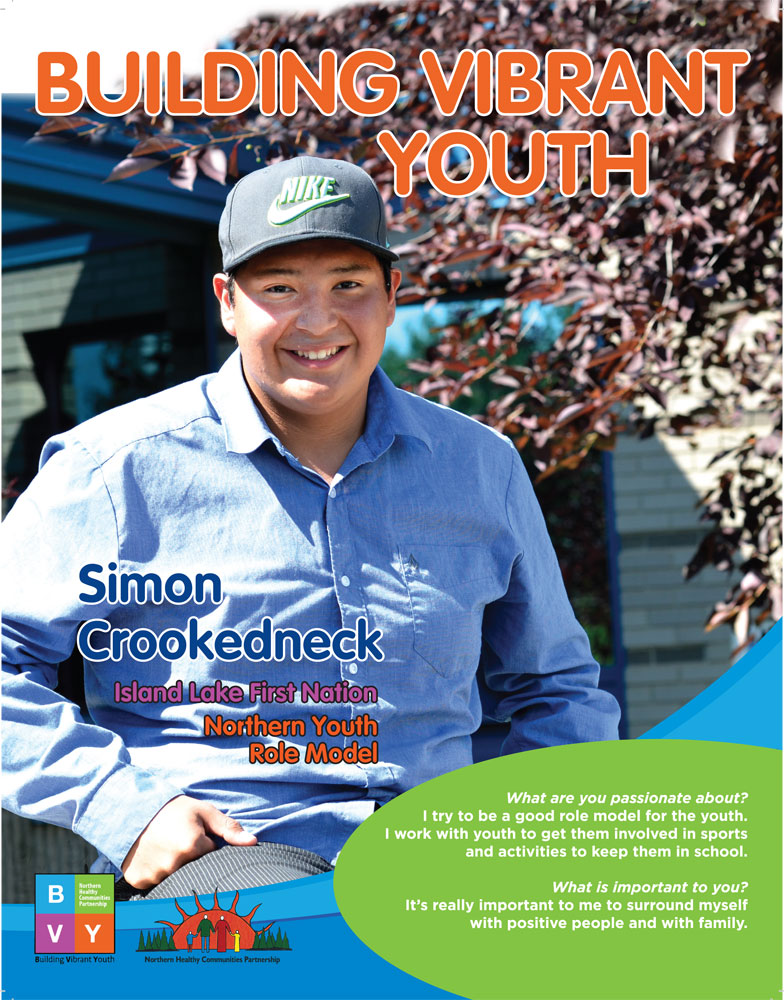 Simon Crookedneck of the Island Lake First Nation is featured in one of a series of posters as part of the Northern Youth Role Model Campaign. Poster courtesy Northern Healthy Communities Partnership

“Education, to me, was always number one, and always will be,” says Simon Crookedneck of the Island Lake First Nation.

Crookedneck is one of four young people from northern Saskatchewan featured in a series of posters recently produced and distributed by the Northern Healthy Communities Partnership (NHCP). With his passion for education, it is appropriate, then, that on one of those posters, he is pictured in front of the Island Lake First Nation School, with the quote, “I work with youth to get them involved in sports and activities to keep them in school.”

The campaign began just over a year ago in April, 2014, with a call for youth role models in northern Saskatchewan, says Amanda Frain, Population Health Promotion Coordinator at the Population Health Unit. After a selection process, in addition to Crookedneck, three other youth and their mentors were chosen to participate in the project.  They were Claude Bridges and mentor Darrell Sewap of Sandy Bay; Summer Michel and mentor Angie Merasty of Pelican Narrows; and ShayLynn McAuley and mentor Jenna O’Connor of La Ronge.

“The mentors and chaperones have been phenomenal in their support,” says Frain.

Crookedneck gives credit to his aunt, Melissa Martell, for the role she played in his life, especially after he lost his father at the age of 15.

“One of the reasons I became who I was in high school was because of my aunt, who mentored me after my father passed away,” he says, noting that he never missed a day of school, played sports, and participated in extra-curricular activities such as movie nights and dances.

Already a well-rounded individual, Crookedneck still says he benefited from the events of this initiative and a highlight for him was a team-building workshop in La Ronge.

“They taught us how to be better presenters, how to project ourselves – to be a true role model,” he says.

As part of the campaign, some of the role models presented leadership workshops for other youth in Fond du Lac and Pelican Narrows, and each of the four youth had access to $1000 to plan and execute a project in their own community, says Frain.

Crookedneck chose to organize a half-day “Gym Blast” at his school. Students formed teams and played a variety of games for points, including wheelbarrow races and a pudding eating contest.

“We handed out prizes. They really enjoyed it,” says Crookedneck, who has since graduated from the school and is now 19 years old and pursuing pre-electrical studies in Meadow Lake.  He hopes what he is doing now will inspire other students.

“Not a lot of people from here go into the trades,” says the young role model.

Crookedneck also has a message for adults.  That message is one that will be airing on MBC Radio, also an NHCP partner, for the months of May and June:  “My advice would be - never give up on your kids.  Be their number one supporter and never give up on them.”