Senator Myles Venne School belongs to the Lac La Ronge Indian Band. Churchill Community High School, part of the Northern Lights School Division, is located in the Town of La Ronge. Situated geographically in between the two is the Village of Air Ronge. To celebrate the accomplishments of this year’s graduates from the two schools, all three communities joined together at a graduation recognition banquet hosted by the Kikinahk Friendship Centre.

Community and community support were themes that were reiterated throughout the evening.

Lac La Ronge Indian Band Chief Tammy Cook-Searson noted, “Even though we are different jurisdictions, we share a lot of services.” As well, some of the graduates have attended one school for a period of time, then the other, observed Churchill Community High School principal Martina Cain.

This is the second year Kikinahk has organized such an event, but for the first time, students pursuing post-secondary studies were eligible for bursaries. Less than a month before the banquet, businesses and organizations were approached to sponsor a bursary, and very quickly, $6000 was raised, allowing more than 20 of the 67 graduates to receive bursaries of $250. That shows how much the community values education – and the graduates, said Kikinahk Executive Director Ron Woytowich.

The bursary recipients are interested in a wide range of careers.  Aaron Vancoughnett hopes to become a Wildlife Technician, while Cora Eninew’s passion is cooking. Both have enrolled in programs at Saskatchewan Polytechnic. Jolene McKenzie will be attending Northlands College in the fall and has her sights set on becoming a social worker, “so I can help my people in my community,” she says. 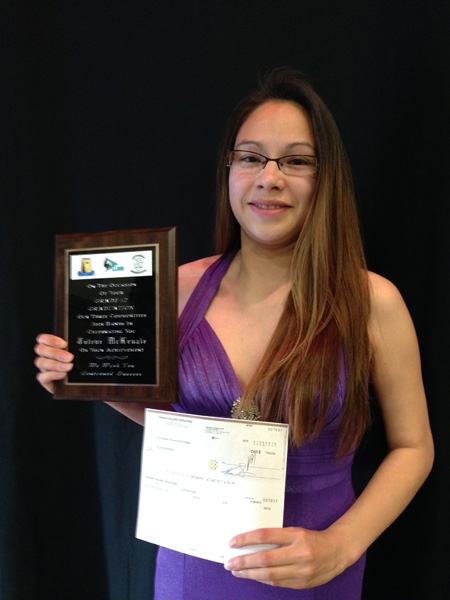 Jolene McKenzie, a Senator Myles Venne School graduate, was honoured with a plaque and a bursary for $250 at a community graduation recognition banquet hosted by the Kikinahk Friendship Centre in La Ronge.

McKenzie is from Grandmother’s Bay, where school only goes up to Grade 9, so she took advantage of a boarding and transportation program that allowed her to complete high school at Senator Myles Venne School. During the week, she stayed at a private residence, but was able to go home for the weekends.

While she enjoyed the banquet, McKenzie was also looking forward to her school’s graduation ceremonies, when more of her family could attend.

“This year, there are six of us from Grandmother’s Bay that are graduating,” she says, more than most years. 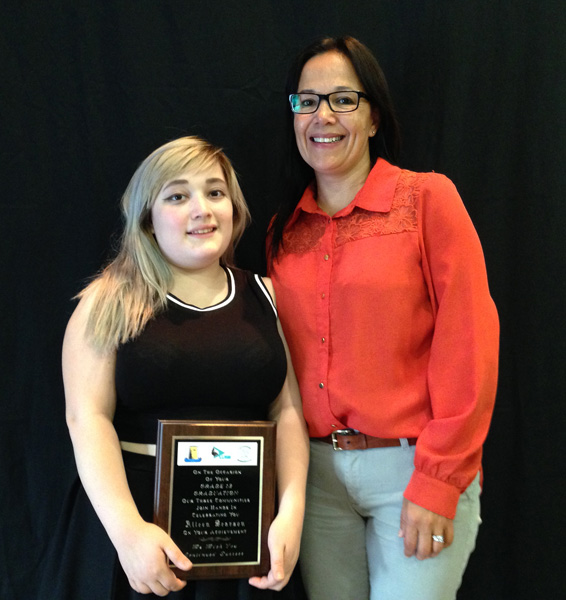 Not all the graduates are going on to further their education right away. Cook-Searson’s daughter, Aileen Searson, wants to follow her dream of becoming an actress.

“That’s her polite way of saying, ‘she’s going to fail at it…it’s not going to work out’,” comments Searson, already displaying a flair for the dramatic.

Searson, a Churchill graduate who has experience acting in school productions, has a plan to research theatre companies and request auditions. Although she says her mother is not overly enthusiastic about her decision, she acknowledges that “she’s okay with it.”