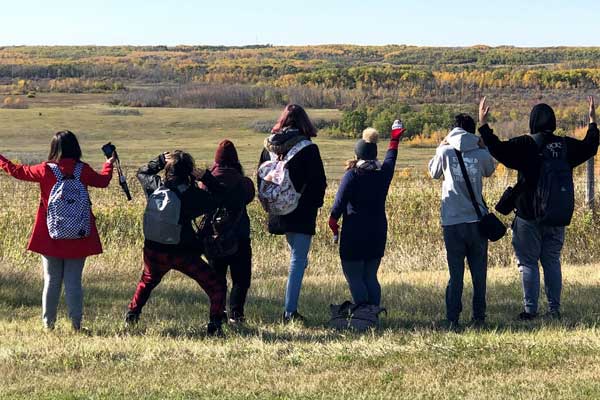 “As an Indigenous person, I think (FTV) was really good for me. It helped me figure out who I identify as,” said Olivia Maurice, a student from E.D. Feehan Catholic High School in Saskatoon.

“Once I started understanding more of who I was, it was really great to see that (identity and culture) implemented in the classroom. I think it would help kids feel more comfortable and more welcome in our classroom when they're being represented.”

Following Their Voices is a priority in Saskatchewan Education’s plan to improve outcomes for First Nations, Metis, and Inuit students and is changing engagement between students and teachers. Started in 2013, and now in 50 schools across the province, teachers in FTV co-construct teaching and learning interactions with students by creating safe learning environments.

Rather than fit into a one-size-fits-all model, each school has a team which adapts to the needs of its students. Desks or tables in an FTV classroom are often rearranged to allow students to collaborate with each other, and students commonly find themselves out learning on the land.

“It feels good to have a teacher listen to you because it's like if they aren't listening to you, they aren't respecting you. It feels like it's going both ways now. She interacts with us to get our perspective, she will (share from her life) and encourage us to do the same,” said Bear.

As of last year's reports, FTV led to a 14.3 percent increase in the number of students graduating within three years of starting grade 10. The FTV executive team pointed to North Battleford Comprehensive High School, which saw an increase in three-year graduates from 27 percent to 49 percent in three years.

“It's basically about bringing kids back to class,” said Jessica Blacklock, a Metis teacher at Mount Royal Collegiate in Saskatoon,

Blacklock has been an FTV teacher for five years and a facilitator of the program for four. She said teachers aren't re-inventing everything, but rather changing the delivery method.

“Teachers are less the talking head of the classroom and more of a facilitator in helping the kids along,” said Blacklock.

Over the past five years, FTV has involved approximately 36,000 students, with 14,000 of those self-declaring as Indigenous. In the upcoming school year, FTV will be implemented in 11 new schools, which will add about 100 teachers to the more than 800 already involved in the program.

“When we started this work in 2013, we knew that First Nations, Metis, and Inuit students weren't doing well in the system and we weren't getting the desired outcomes... we wanted to identify the cause of that disconnect and put in place an initiative that would better meet the needs of those students” said Tim Caleval, executive director of the Priority Action Team responsible for FTV.

“We hear from schools all the time that kids feel more represented, that teachers really care for them and genuinely have high expectations and want them to be successful.”