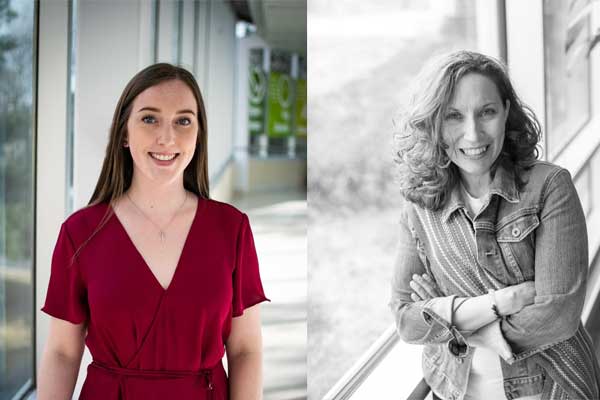 Aidan Mowat (LEFT) PhD. of Geological Sciences at the University of Saskatchewan is one of the two recipients of this year’s $20,000 Queen Elizabeth II Centennial Aboriginal Scholarship. Merelda Fiddler-Potter (RIGHT) is a PhD student at Johnson Shoyama School of Public Policy and Vanier scholar. Fiddler-Potter won the Queen Elizabeth II Centennial Aboriginal Scholarship for her research. She is one of two recipients of the scholarship.<Br><Br> Photos submitted.

Aidan Mowat, a PhD student in Geological Sciences at the University of Saskatchewan and Vanier Scholar Merelda Fiddler-Potter, a PhD student at Johnson Shoyama School of Public Policy in Regina will each receive $10,000.

Fiddler-Potter was a journalist for sixteen years, primarily with the CBC and is currently a sessional instructor at First Nations University of Canada. She was thinking of her next steps for her PhD project when she got the news she had won the scholarship.

“I was at first kind of shocked when [they] said I won and I was just really grateful,” she said.

Fiddler-Potter’s work is a qualitative comparative case study that looks at how media frames topics such as missing murdered Indigenous women and the shooting death of Colten Boushie.

“Essentially what I’m looking at is how journalism and the stories that we tell can contributed or doesn’t [contribute] to the reconciliation process,” said Fiddler-Potter.

She said receiving the award gave her a boost and made her feel that the work she is doing is both valued and recognized.

Mowat was born and raised in Saskatoon, where she is currently working on her PhD. She is studying the ground water within the Williston Basin, a small sedimentary basin that spans most of southern Saskatchewan and into Alberta and Manitoba.

“I’m looking at the ground water, its evolution over time and how we can date that to determine different paleo events and hydrogeological activity in the basin over time,” said Mowat.

Mowat was excited to have received the scholarship. She says it will help her carry out the work for her PhD without having to worry as much about finances.

“I’m extremely grateful and I encourage anyone who self identifies as Métis, Aboriginal, Inuit to apply for [the scholarship],” said Mowat. “It is an amazing opportunity to get some funding and survive as you go through university.”

“The Queen Elizabeth scholarships recognize the importance of both fundamental and applied research to both public policy and to the continued expansion of Saskatchewan’s innovation economy,” said Advanced Education Minister Tina Beaudry-Mellor in a press release.