For a week in February the University of Saskatchewan celebrates Indigenous successes and contributions on campus. 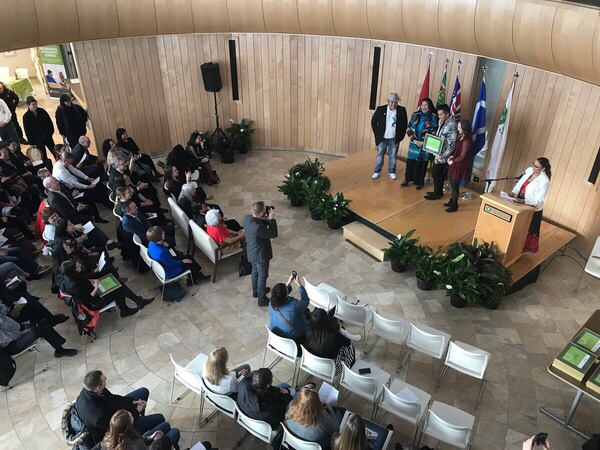 Beginning Monday, Feb. 4 with a pipe ceremony, there were five days of lectures, events and announcements under the theme powerful voices.

She was the emcee during the Indigenous Student Achievement Awards on Feb. 7. During the ceremony 42 students were recognized for academic excellence, leadership and community involvement.

The awards ceremony was created by students, including Terri Favel, who wanted to recognize the successes of fellow Indigenous Students.

“We see you and we want to recognize that,” said Favel, who is now set to graduate nursing.

There is a sense of pride watching students receive awards after everything they work to overcome to get their education, she said, adding she has seen students deal with poverty, homelessness, and single parenting.

Wasacase-Lafferty said the university saw the work of the students recognizing each other and wanted to support the initiative – this was where the achievement week started.

“What started off as an award ceremony, then another event was added, and another event, the next thing you know we have a week-long [series of events],” she said.

At the achievement ceremony, Aubrey-Anne Laliberte-Pewapisconias received an award for leadership and community involvement from the Indigenous Students’ Council.

“It’s really incredible,” the Edwards School of Business student said, about being recognized by her peers.

“I think that the stigma and stereotypes around Indigenous People are so strong that things like this show people that we are thriving in a modern-day society,” she said.

“It’s nice to feel that we are being recognized and other people can see it. Indigenous Achievement Week as a whole shows Indigenous and non-Indigenous people that we are doing pretty well for ourselves.”

Each of the winners received a certificate and a special eagle feather pin that only winners of an Indigenous Student Achievement Award will own.

Darian Lonechild, the female youth representative of the Federation of Sovereign Indigenous Nations and co-chair of Assembly of First Nations National youth council, received an award for leadership. She was nominated by the Indigenous Studies department where she is in her fourth year.

“I was really happy,” she said about finding out she was nominated. Lonechild had seen the awards as a first year and in “my last year of school, it happened.”

“Events such as these are really important because Aboriginal or Indigenous youth have a lot more to overcome,” she said. “To celebrate the resistance that exists is so incredibly important.”

A storytelling event during the week featured the official launch of a Certificate in the Study of Indigenous Storytelling. The week wrapped up with the annual Round Dance.