Indigenous students gathered at the Gordon Oakes Red Bear Centre in solidarity with the Unistoten and the Indigenous rally in Washington, DC on Friday, January 18th. At the Unistoten camp, women and youth have been arrested for their peaceful protest against pipelines, while various clips from the rallies in Washington have been widely shared. 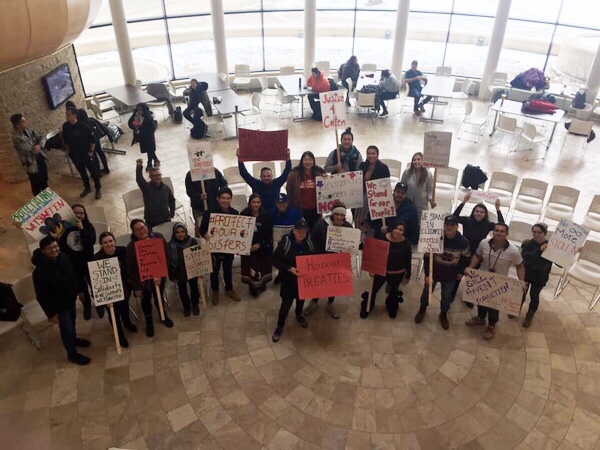 Aubrey-Anne Laliberte-Pewapisconias from Little Pine First Nation was one of the lead organizers and emcees and listed some of the concerns and focuses of the gathering, as exemplified by the many signs held by the crowd: the Washington rally, missing and murdered women, Native lives matter, honour the earth and protect the children.

“These issues we can all identify with as matters that impact us as Indigenous people,” she said. Pewapisconias, along with Jerrica Prettyshield, and Elder Mary Lee who opened with prayer, discussed the issues at length for the crowd gathered. USSU President Rollin Baldhead also shared a drum song to open, after the prayer.

“Jerrica and myself both felt passionate about these matters...we are people who have survived genocide, assimilation, colonization, and abuse in extreme forms,” said Pewapisconias, who opened by sharing her own experience growing up as an urban Indian, being told to go back to Residential Schools by other kids, feeling less than, or being told she was not a real Indian because she could not speak her language or did not grow up on a reserve.

“My parents explained to me that our people...lived freely on our land and were blessed with having peace with their way of life and a relationship with Mother Earth. That’s a real Indian, and we are still Indigenous people now.”

“I am proud of my culture and my ancestors,” she said, adding she is descended from Residential School survivors who still speak their language and practice their culture. “I give thanks to them.”

She mentioned the power of stories to heal and to harm — stories have been used to both strengthen and attack Indigenous people, and she recommended the Harold Johnson Think Indigenous online talk about stories.

“Colonizers want us to be driven apart by our differences...but we will never let them win,” said Pewapisconias. “We will survive, thrive, and take back what we deserve.”

The rally included a panel comprised of Pewapisconias, Lee, and Prettyshield following the opening address, and participants had signs demonstrating their support for the issues which included the Unistoten, the lands and waters, and protection for Indigenous peoples and Mother Earth.