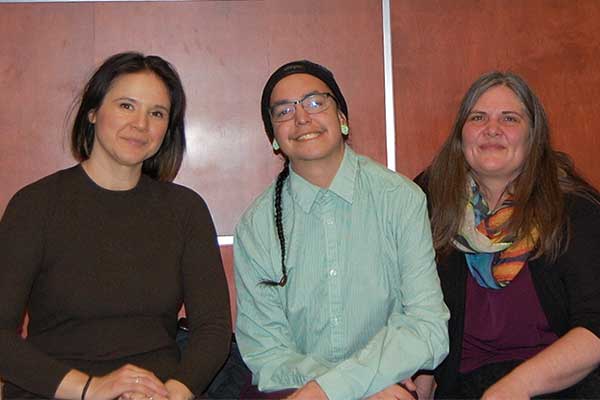 Every March 8, International Women’s Day is an opportunity to highlight extraordinary women empowering and enabling others and the women of ta-tawâw Student Centre fit the bill.

Misty Longman, from George Gordon Saulteaux First Nation, is the manager of the ta-tawâw Student Centre at the University of Regina.

She and other Indigenous women staff members are passionate about creating a welcoming experience for all students. The ta-tawâw Centre is a space that promotes Indigenous ways of knowing and being specific to Treaty 4 territory. The programs run by the Centre create a community for students to network, receive counseling and learn about Indigenous culture.

Longman is an alumna of the First Nations University of Canada but came to campus long before that.

“I’ve been on campus for almost 30 years of my life. I am a product of a single mother who came to university and when she did not have daycare, I was on campus”, said Longman.

After graduation, Longman started working as an Indigenous recruiter at the U of R and after 15 months, the manager position at the Centre became vacant. In 2012, Longman became the manager, almost a year after another Indigenous woman, Rachel Janzé, became program coordinator.

“I started working here in September 2011, two weeks from the Tipi raising competition, and it was nuts. I had no experience planning an event of that magnitude and was initially overwhelmed,” Janzé said. “However, the support I got from the community saw me through. I came from working at the university’s archives so it was a real learning curve for me.

“One of my favourite memories from those first days was when a student came to us in tears with an issue she had,” Janzé continued “Within half an hour, we found a solution and then she asked me for a hug. Being able to help people like that made me very happy.”

For both Longman and Janzé, it is important to create programs for all students to feel at home, regardless of their background and what they are going through. Students can participate in pipe ceremonies, round dance feasts, resume review luncheons, counseling sessions with an elder and smudging.

“When it comes to feasts and round dance, we work with our Indigenous women on how to be cooks for feasts and what the protocols for the process are as women in the ceremony,”

Longman said. “We also work with our knowledge keeper, Brenda Dubois, to educate the young women on the roles women play in terms of parenting, as well their roles of bringing up Tipis in the home fire and the significance of that.”

The knowledge keeper, Dubois, is fondly referred to as “Grandmother” and she makes herself available to students who need someone to talk to.

Morgan Esperance, a third-year journalism student at the U of R, testifies to the programs offered at the Centre. Esperance was a part of the nitôncipâmin omâ (OMA) program run by the Centre in her first year of university. OMA helps new first-year students navigate through university culture. Esperance, who is from Beardy’s and Okemasis First Nation, recalls how crucial that program was in helping her find her way.

“The program gave me a lot of courage and support during my first year,” she said. “It was a comfortable space where you could talk about female things without feeling awkward. After experiencing the programs for myself, I decided to work there last year and be a part of the great work.”