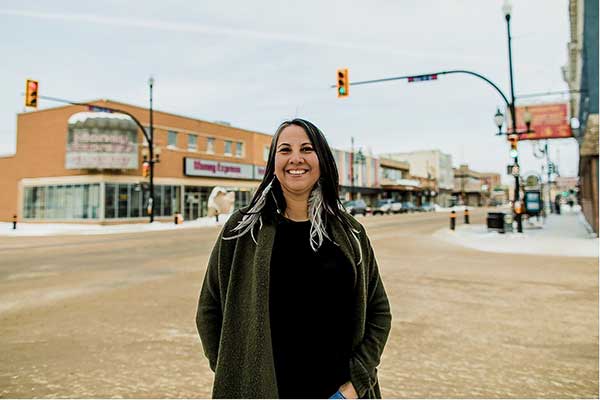 When Belinda Daniels wanted to learn in a Cree language immersion program, there weren’t any, so she hired teachers and created a Cree camp where she could be a student.

The Sturgeon Lake First Nation teacher was serious about learning the language: she had taken a couple of university classes during her Education degree program, was taking Cree night classes while working on her Master’s degree and practicing speaking with her grandmother, but the learning wasn’t coming fast enough, she recalled in a recent interview.

“It came out of frustration,” she said.

“One day I thought, ‘why not create a Cree camp with Cree teachers in a Cree context?’…. It seemed so simple, but yet it wasn’t being done anywhere.”

It was 2003 when she spoke to two Cree language teachers.

“I said, ‘let’s do a Cree camp. You guys speak Cree and teach Cree and we’ll all camp and I’ll pay you.’ Like literally, from my pocket. I received $500 from the Saskatchewan Cree Language Retention Committee. There was basically no money and there wasn’t any money for a long time,” she said.

Daniels hired the teachers, who went with her and four other students to camp at her home First Nation.

Sixteen years later, Daniels runs two one-week-long camps each summer. She accepts 30 students per camp and has to turn people away. She also has mini-workshop language experiences throughout the year.

“The language camp for me, (is) raising the consciousness of the value of language. Having the people choose to be Cree speakers is another huge success for me,” she said.

It takes at least 1,000 hours of immersion to become mid-proficient.

The camps are just one of the reasons Daniels has won a host of teaching awards, including from the Canadian Teachers Federation, the FSIN, a University Award for Research and a Saskatchewan Heritage Award. In 2016 she was nominated for a global teacher award and was invited to Dubai, where she met innovative teachers from around the world.

Daniels’ passion for teaching the language has always been with her.

“Language chose me,” she said.

“I have had really vivid dreams, dreams that send messages.”

She was 10 or 11 when she had a dream in which she saw ancient rock petroglyphs of Cree words written in syllabics.

“When you come from a nehiyaw realm of thinking and being, it unfolds where the language spirit chose me, as opposed to me choosing that language was going to be my thing,” she said.

Daniels says she was blessed to be raised by her grandparents and grew up hearing them speak Cree to each other. She heard the intonation and rhythm of the language. She understood when one word ends and another begins, when someone is asking a question or making a statement.

She still doesn’t consider herself fluent or even fully proficient but says she can speak, “everyday conversational Cree.”

“The language is vast like the ocean and deep… If you’re not raised in the language, fluency is very hard to gain. It can be done. It is hard, but not impossible”

Her understanding of how the language works has led her to invent another tool for teaching Cree.

“Fluent speakers will overlook various aspects of the language and learners kind of get stuck in mini plateaus where… you’re wondering ‘what do I learn next?’ or ‘what should I be saying next?’

The nēhiyawak understand that people are part of nature and equal to, not better than, other living things, she said. That reverence for all of nature is reflected in the language and the way things are taught. There is ceremony attached to everything because there is a deep awareness of the sacredness of everything, she said.

For that reason, Daniels believes that the way Indigenous languages are taught needs to change: respect and protocol need to be attached to learning and teaching languages.

She has also learned that sacrifice is an important value. For her, that means devoting time and energy to her pursuit of the language and traveling, at least once per month, to Sturgeon Lake.

“This is where I learn so much. It wasn’t at a university… I learned how to work through the academy to get where I need to be (but) the more educated I’ve become, the more I want to go home to my roots. There is strength there,” she said.