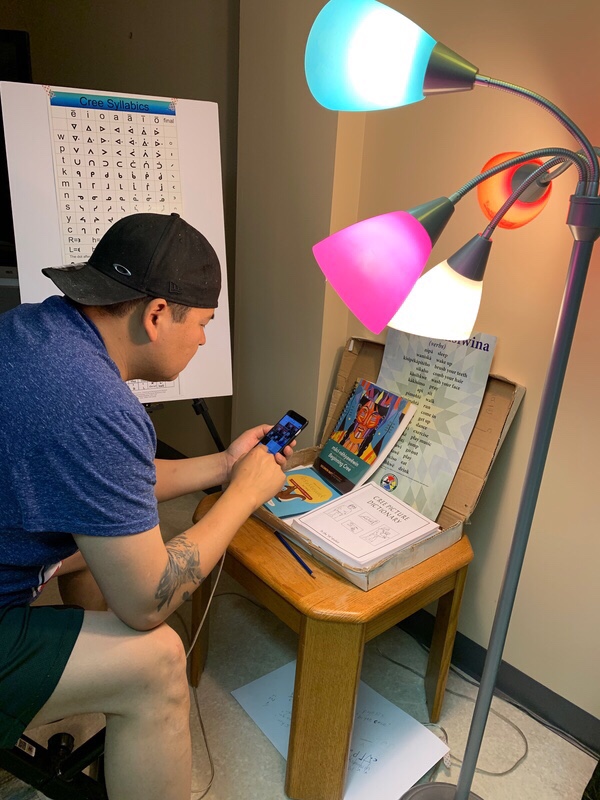 As summer ends and kids return to school, one life-long educator and language advocate believes it’s never too late to start learning the Cree language.

Simon Bird has spent almost his entire career in the education field, stave for a short stint in regional politics.

He was fortunate to grow up with the Cree language and while living in Saskatchewan, he always had the opportunity to speak and hear it.

However, in 2015, that all changed when work took Bird and his two kids to Alberta and into the heart of Nakoda territory.

Being surrounded by language that was not his own made him lonely.

“One day, I was trying to teach my little girl and I said, ‘meyokesikaw’,” said Bird. “It was almost like I was trying to force the lesson and she kind of laughed at me. I was saying, ‘meyokesikawin’ and she said, ‘Daddy, it sounds like you are saying, may you kiss a cow’.”

He thought her response was pure genius because it was a way for her to remember the phrase, which translated means ‘good day.’

Bird posted the interaction between him and his daughter on his Facebook page.

“There was a lot of people who commented saying, ‘it was a fun and unique way’ and ‘it was easy to remember the lesson and the words’,” he recalled. “There was a growing number of people who suggested he start a Facebook page.”

That first post included a meme of Darth Vadar saying May You Kiss A Cow. Bird also included the Cree phrase Meyokesikaw along with a phonetic spelling of Mee-you-Key-see-cow and the literal translation ‘’It is a nice/good day’ from the Cree Y - dialect.

Today, the website has more than 14,400 members from around the world.

One of those members is the now 20-year-old Cameron Adams from Gimli, Manitoba.

“I was added to the group by a cousin and began learning a little bit of the basics,” he said. “I was in Grade 11 and it just started a passion. I started putting (Cree words) in my journal and I started posting (what I learned) on Facebook. I bought an Alberta Elders Cree dictionary.”

The more words he mastered, the more he learned about the different dialects of the Cree language.

By his second semester of Grade 12 he would do his school’s cafeteria menu completely in Cree.

Now a student at the University of Winnipeg, Adams is pursuing an Integrated Bachelor of Education with Indigenous Studies. It is the first step in his goal to becoming a Cree language teacher in Northern Manitoba.

Adams said the last fluent Cree speaker in his family was his great grandmother who was originally from Norway House.

He connected with Ellen Cook a knowledge keeper from Grand Rapids, Man. who has helped him transcribe 20,000 Cree words all in the N-dialect. Adams hopes to launch his app by the end of the year.

“(Bird) ignited a passion in me because he would always help me with Cree translations,” said Adams.

Adams shares what he knows online and with his own family and one day would like to pass the language down to his future children.

Being able to speak the same language his great grandmother spoke has connected Adam to his own history. His grandmother, who is not fluent, encourages him to keep learning and has told him how proud she is of him and his efforts to revitalize the language.

Bird said no one is too old or too young to learn their language and fluent language speakers, like himself, have a responsibility to do what they can to keep the language alive.

He takes no credit for students like Adams, but does feel a sense of pride in what one young person has been able to accomplish in terms of language preservation.

Bird says the Facebook page has reignited his own educational desires and would like to pursue a doctorate in indigenous language, so he can become a language teacher.

Both Bird and Adams believe anyone can learn their traditional language and are grateful for technological advancements because learners have the ability to connect with language experts online through social media or by accessing language apps.