A young man from the Keeseekoose First Nation is hoping to make it into the NHL or to play professional hockey. Kishaun Gervais, 17, lives and breaths everything about hockey.

Since the moment he held a hockey stick in his hands at the age of three, his passion for the sport was ignited and has played ever since. 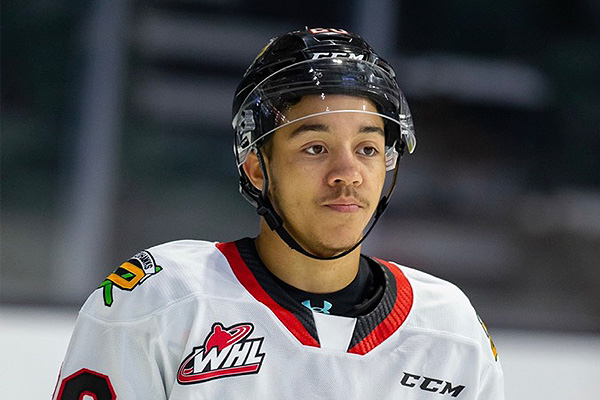 Kishaun Gervais plays west-wing for the Portland Winterhawks and hopes to be drafted by the NHL or pro hockey. Photo credit: Chris Mast

“I train every day. I workout and practice hockey,” he said. “As soon as I was done high school, I knew exactly what I wanted to do. I wanted to take college courses and get my business degree but my main goal was to become a professional hockey player. Knowing that I’m a few steps away from the NHL or European pro hockey, it’s an amazing feeling.”

Gervais graduated from high school in Yorkton last year and is now playing in the Western Hockey League (WHL) in Portland, Oregon for the Portland Winterhawks.

“In Bantam hockey, I ended up getting drafted by Portland, Oregon. I worked hard as I could to make the team and I ended up making it this year,” he said. “I knew I didn’t have a solidified spot so I had to work really hard every single day [to make the team]. It was a big weight off my shoulders because I’ve been trying to make the team for the past three years. I’m pushing everyday to be a regular in the line-up.”

His experience in Portland is going great so far but it was an adjustment that he had to get used to.

“It’s definitely different [over here]. It’s a different culture and a big city,” he said. “I’m about 20 hours away from home but it’s nice here because have a lot of guys from Saskatchewan on the team so that’s good and it makes it feel like home.”

Gervais will be playing in Oregon until next Spring and hopes that his performance in the upcoming months can spark interest into being drafted into the NHL or professional hockey.

“I’m hoping to get an NHL or pro contract. This year is my draft year but if not, I’m still eligible next year,” Gervais said.

Gervais hopes his drive for hockey inspires others to follow their passion for the sport.

“Work hard even if people say you can’t do it. Just believe and find yourself. Surround yourself with positive people,” he said. “There’s a lot of people who may try bring you down. For me, if you work hard every day, you will be able to pursue your dreams.”