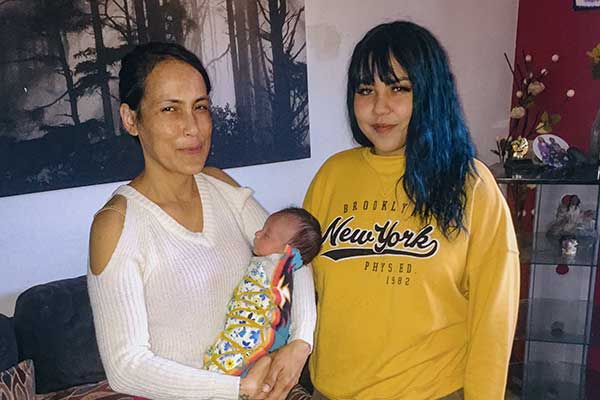 Canoe Lake Cree First Nation - On a reserve, access to 24-hour medical services is impossible. The everyday reality is that if anything happens after 4 p.m., you have to call the clinic to arrange to see a nurse. Imagine it’s in the middle of the night and your daughter goes into labor with contractions that are fast and furious. What would you do?

Mandy Laliberte went through just such an experience recently. Laliberte’s pregnant 24-year-old daughter, Alyshia Laliberte, has been staying with her at the First Nation, 137 kilometres north of Meadow Lake, during the COVID-19 pandemic.

Laliberte woke up in the middle of the night to find that Alyshia was in labor. She called the clinic to let them know what was happening and to tell them they were on their way, but the unexpected happened. In her driveway, during the wee hours of April 26, Laliberte delivered her own granddaughter in the backseat of her SUV.

After calling the clinic around 3:30 a.m., Laliberte had helped Alyshia into her vehicle. Before they could move, Alyshia screamed that the baby was coming and she could feel it. Laliberte jumped back out of the driver’s seat, opened the back door of the SUV, and found that the baby had already crowned.

“I was really freaking out. I started crying and kept saying ‘Oh my God!’ I didn’t know what to do,” said Laliberte, “I somehow managed to help her deliver the baby and made sure it was crying before I wrapped it in my jacket. I put the baby on Alyshia’s chest and I slammed the door shut then drove as fast as I could to the clinic. It was surreal.”

The trio arrived at the clinic around 3:58 a.m. Laliberte laughs as she recalls Alyshia asking her, “Mom, did you even see what the baby was?” Laliberte had been running on pure adrenaline and her focus was on getting them to safety so she didn't even think to check the sex of the baby. They both peeked over the nurse and were happy to find a beautiful 4-pound baby girl who would soon be named Ellie Faith Laliberte.

Alyshia is thankful for Laliberte’s quick thinking and actions, “It was the scariest moment of my life. I never expected that to happen. I'm glad my mom was there to help me,” she said.

Mom and baby are both happy and healthy. As for Laliberte, this heart-pounding, eye-opening experience has her considering a career as a mid-wife.