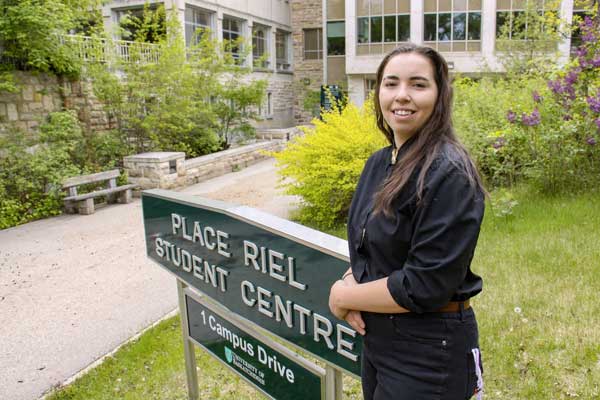 Autumn LaRose-Smith is the fifth Indigenous person to serve as the USSU president in a row. Photo by John Lagimodiere

Autumn LaRose-Smith began her new role as president on May 1 and is the fifth Indigenous person in a row to hold this position. She previously served as USSU Vice-President Student Affairs.

She was encouraged by many of her peers to run for president and she contemplated it for awhile.

“I originally wasn’t planning on [running] but I looked at the wall of the past executives and noticed that there hasn’t been a female president in over 10 years,” she said. Josie Steves was elected president in 2009, she said.

LaRose-Smith, a fourth-year SUNTEP student, said and the rest of the student union leaders are having to recreate what their positions mean, now that their work has moved online because of the pandemic, she said.

“It definitely is a lot of hard work but we’re figuring out how we can best organize ourselves as a students’ union so we can work best for the students,” she said.

When asked about students’ main concerns about how the pandemic will affect their education, LaRose-Smith said, “There are a lot of concerns in regards to access and affordability as well as the quality of education when going online.”

Her team will continue the strategic direction implemented by the last executive, she said.

“We have four major goals that we are working towards. They are promoting education, revitalizing the community, facilitating leadership and decolonizing systems.”

Past president Regan Ratt-Misponas helped her transition into the leadership position and passed down knowledge and tips to fulfill her duties as president.

Ratt-Misponas has known LaRose-Smith since the beginning of his university career.

“The type of leader Autumn is, she is very student-focused and student-centered. She really tries to go out of her way listening to the issues that students are facing and trying to find some way to ensure that students get the best results. I think the USSU and the University of Saskatchewan are in good hands [under] her leadership.”