Every year, First Nation, Metis and Inuit graduates from Saskatoon and surrounding area have the opportunity to share their culture and academic successes at the annual Saskatoon Indian and Metis Friendship Centre (SIMFC) graduation. 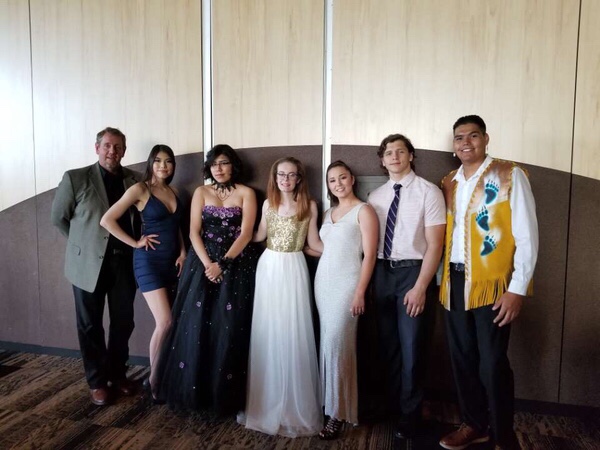 Emily McKay Hikwa (white dress, third from right) and other Marion Graham graduates at the 2019 SIMFC Graduation in Saskatoon.

Now in its 35th year, the event that once started in a school gym with a handful of Indigenous students is now a major event at TCU Place, with over 200 graduates attending this year's ceremony.

“A lot of students won't get the chance to have a banquet marking this major milestone in their life, so I think its really important,” said SIMFC graduation co-ordinator Terry Gossen.

“To see within their own Indigenous communities how many people are graduating – getting together as a big group with a lot of representation from their community – it's empowering,” said Gossen.

The graduation included several cultural traditions, said Gossen, including a ceremonial smudge, and the students themselves performing dance and music.

One graduate in particular was a standout – Emily McKay Hikwa, a high-school graduate from Marion Graham Collegiate in Saskatoon, as the only Inuit student at this year's celebration.

Being an Inuit person in Saskatoon, McKay Hikwa said she is no stranger to feeling a little different. But different is good, she says.

“Growing up, I've always been surrounded by Cree and Metis people and culture. With my Inuit culture, we fit in with some of the traditions, but I've always felt like we've been classified as a different type of Indigenous,” she said.

“So it was really important to me to share my culture at the graduation. I've always loved my culture.”