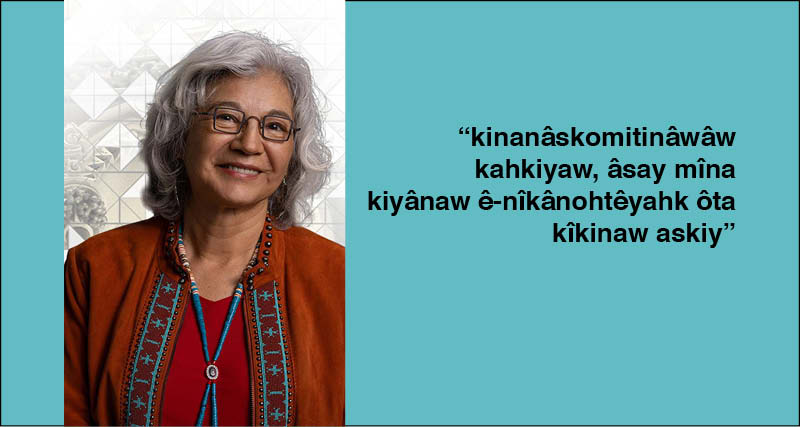 Louise Bernice Halfe has been named Canada’s next Parliamentary Poet Laureate. The appointment tops a distinguished career that many writers could only dream of.

Raised on Saddle Lake Reserve and a survivor of Blue Quills Residential School, she previously served as Saskatchewan’s second Poet Laureate. Her ability to weave the Cree language and teachings into her works has set her apart from many. Her books, Bear Bones and Feathers (1994), Blue Marrow (2004), The Crooked Good (2007) and Burning In This Midnight Dream (2016), have all received numerous accolades and awards. Sôhkêyihta features selected poems and was published in 2018. Her latest work, awâsis – kinky and disheveled, will be released in the spring of 2021.

Halfe was chosen from a short list of esteemed candidates and is the first Indigenous appointee. And she was gracious in her acceptance of the position. “kinanâskomitinâwâw kahkiyaw, âsay mîna kiyânaw ê-nîkânohtêyahk ôta kîkinaw askiy. I am deeply honoured and humbled to serve the people from coast to coast to coast. My dream is that poetry will be given the same stature as that of the novel,” said Halfe in a statement. “It is a privilege to bring the First Peoples’ voices and stories, poetry and whatever genre they are bringing to life to the forefront. Thank you for this gift.”

The position of Parliamentary Poet Laureate was created in 2001 to build awareness of the reading and writing of poetry. Halfe wont just be sitting around and banging off random poetry. Her work will include a range of duties, including composing poetry, particularly for use in Parliament on important occasions; sponsoring poetry readings; advising the Parliamentary Librarian on the Library’s collection, and performing related duties at the request of the Speaker of the Senate, the Speaker of the House of Commons, or the Parliamentary Librarian.

“Louise Bernice Halfe – Sky Dancer, is an accomplished writer who has contributed significantly to Canada’s poetry community through reflections on her Indigenous experience,” said Hon. George J. Furey, Speaker of the Senate of Canada in a statement. “As the ninth Parliamentary Poet Laureate, Ms. Halfe will continue to promote the diversity of voices heard across our country.”