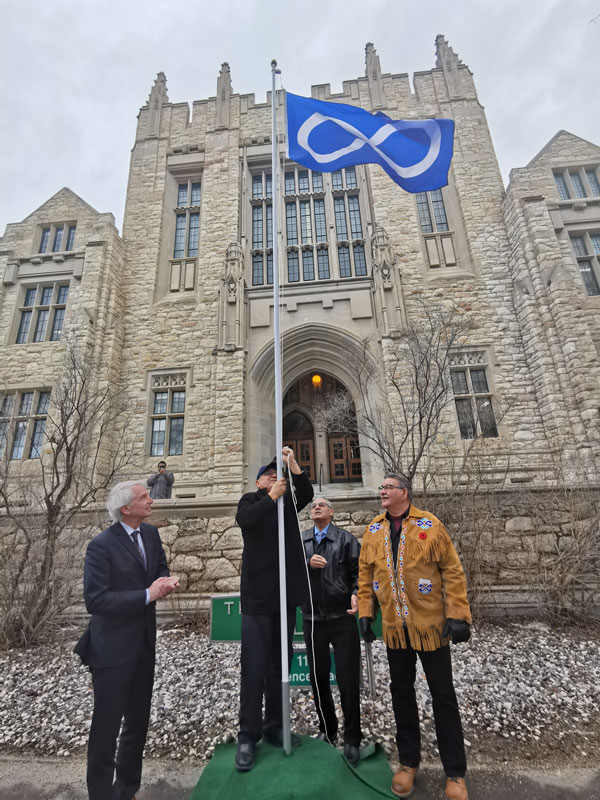 The Métis Nation flag is raised in front of the Thorvaldson Building on campus. Photo by John Lagimodiere

The University of Saskatchewan (USask) and the Métis Nation–Saskatchewan (MN-S) have signed a Memorandum of Understanding (MOU) designed to improve the education status of Métis people, remove barriers and close the university achievement gaps between Métis and non-Indigenous populations.

“This MOU shows our commitment to improve upon university academic programs and services currently in place or about to be established, through a collaborative and co-ordinated partnership for improving university education access, relevance, and achievement of Métis people and their communities within the University,” said USask President Peter Stoicheff. “Métis Nation-Saskatchewan is proud of its commitment to post-secondary education,” said MN-S President Glen McCallum.

“Under our 10-year, $89-million funding program, announced in July, almost 400 students already received funds and enrolled in class this fall. With continued community partnering, such as today’s announcement with the University of Saskatchewan, Métis youth can confidently follow the examples set by individuals like James McKay, Howard Adams and other Métis leaders, thinkers and achievers.” 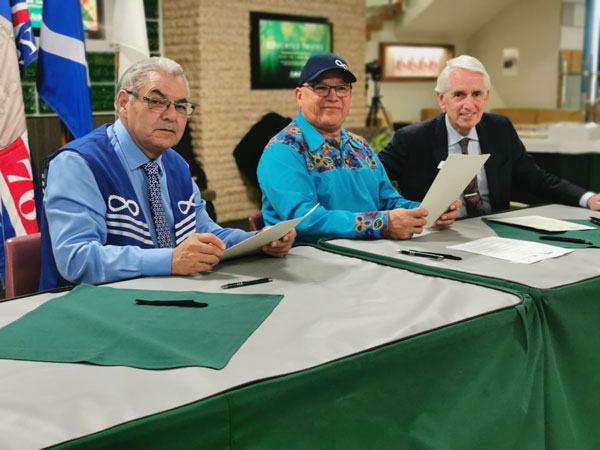 MN-S Minister of Education Earl Cook, MN-S President Glen McCallum and U of S President Peter Stoicheff signed an MOU to improve outcomes for Metis students at the University.<Br> Photo by John Lagimodiere

The MOU will help guide programs and get Métis students into a variety of colleges. “This is where we can plan together to be very focused where we can touch base with our students when they begin to choose their careers. There are many more areas that we need our students to be educated in and this is an opportunity for that,” said President McCallum. “This MOU is going to go great. The relationship is there and the understanding and communication.”  Enrolment at USask continues to rise, with 3,320 Indigenous students on campus in 2018/19, an increase of seven percent. Almost 40 per cent of those students identify as Métis. The university is also focused on increasing the number of Indigenous faculty, sessional lecturers and staff. In 2019, there were 217 self-identified Indigenous employees on campus.

Students of Indigenous descent were rare at institutes of higher education in Canada in the early 20th century. But USask welcomed its first Indigenous student just months after opening its doors. James McKay, a member of the original Board of Governors, was a noted Métis lawyer whose distinguished background served him well for 23 years in providing guidance and wisdom to the board as it grappled with managing the business affairs of the fledgling institution.

McKay also has the distinction of being the first judge of Indigenous ancestry to be appointed to the court in Saskatchewan. Howard Adams, a former professor in the Department of Native Studies at USask, was one of the most highly educated, outspoken and controversial Indigenous leaders of his time. Adams joined the RCMP shortly after graduating high school and went on to complete a bachelor’s degree, a teaching diploma, and a doctorate in the History of Education. He was the first Canadian Métis to earn a PhD.

“This MOU is another milestone in the ongoing development of our relationship with the University of Saskatchewan. Métis will have a stronger, more visible presence on campus, as we work on joint initiatives,” said MN-S Education Minister Earl Cook. The MOU is designed to encourage and contribute to Métis presence and representation at all levels, including employment, governance, enrolment, completion rates, Métis-specific research, Métis studies and curriculum, cultural celebrations, Métis-specific symbols, naming and Métis community engagement. This MOU will also include partnerships, planning and sharing of ethical research initiatives that would advance the interest of the Métis Nation and residents of the province of Saskatchewan.

“This is another step in the Indigenization of the campus,” added President Stoicheff. “This is a way of understanding and supporting a large number of students at the University. There are features of the MOU that commit the U of S to meeting with the MN-S to talk about things we can do with our research, programming and hiring. The only way we can work on Indigenization and reconciliation is with these partnerships. It takes someone like President McCallum coming to us and saying we want you to be a good place for our people and us asking what does that look like and then we can carry it out.”