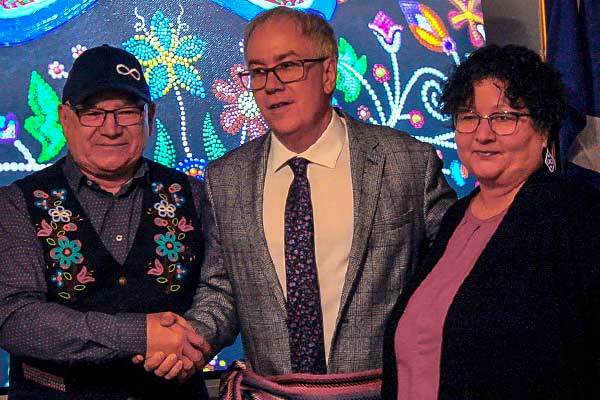 
The future of the Michif language looks bright, as the Metis Nation-Saskatchewan (MN-S) and Canadian Geographic have partnered to create a multi-faceted Michif language program.

Announced Wednesday, January 22, 2020 at the Gabriel Dumont Institute in Saskatoon, ‘The Future of Michif’ program will celebrate Michif and Metis culture, while building national capacity to educate and inspire the next generation of Metis youth to learn their language.

“The signing is a road to where all Canadians can see, (we) have developed a true partnership and relationship with the provincial and federal government...so everyone can be proud that we are true Canadians.”

Michif is one of the many endangered Indigenous languages in Canada. According to the 2016 Canadian census, there are only about 600 people in Canada who speak the language, many of whom are over 60 years of age. The MN-S and Canadian Geographic hope the language program reverses this downward trend.

“We have to start seriously connecting with people who speak the language,” said McCallum. “The more credible people we bring to the table, the more we show our people in this province and across Canada that we do care about Metis and care about our culture, identities, values, and language.”

The partnership will elevate the national consciousness of both Michif and the MN-S, as Canadian Geographic will bring to The Future of Michif program their audience of 4.1 million readers, and 1.1 million followers on social media.

“We’re honoured to be a part of this,” said Gilles Gagnier, Chief Operating Officer of Canadian Geographic Enterprises. “We’re not saying we can solve the problem of a dying language and dying culture single-handedly, but what we do know is that it’s very important, too important not to try. So, we’re getting behind this program with all our resources.”

The Future of Michif program will include a Michif Language Speakers Bureau to promote the language; a free summer-camp style program for Metis youth focusing on Michif language learning during the Batoche Days celebration; Michif language training for educators; and a documentary film. The Canadian Geographic magazine will also feature a story on the Michif language with an associated poster map to reach millions of Canadians.

Sherry Stoll, MN-S Minister of Heritage and Language, reflected on the importance of supporting and vitalizing Indigenous language.

“From a personal perspective, I understand what it’s like to grow up losing your language,” said Stoll. “Without your language, you lose part of your culture, a part of who you are.”