Just a handful of years ago, teachers didn’t think much of Rollin Baldhead. He was cycling through schools in Saskatoon and Duck Lake, with little support or encouragement from anyone outside his family. In grade 4, a teacher told him that, as an Indigenous youth, he was destined to be influenced by drugs, alcohol, and gangs. In high school, a teacher suggested he and the only other Indigenous classmate in the room might become garbage men.

“This normalized that kind of thinking,” said Baldhead. “Drinking, drugs, rebelling. That was normal. And it shouldn’t be normal.” 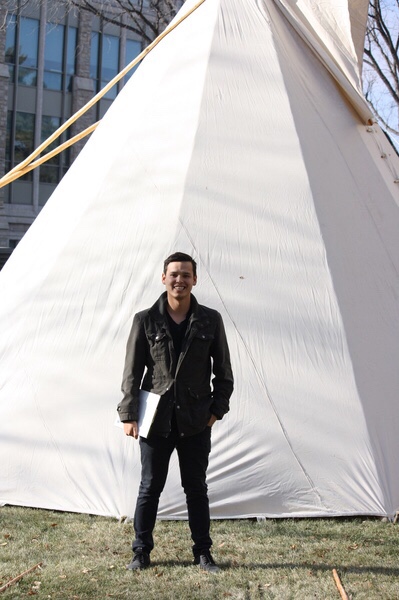 At 25 years of age, Baldhead’s current responsibilities are as follows: education student at the University of Saskatchewan (U of S); Federation of Sovereign Indigenous Nations (FSIN) co-Youth Representative; and the (newly elected) U of S Students’ Union President (USSU). It was a change that a few saw coming.

Baldhead carries himself an easy confidence, and is welcoming with his toothy, ear-to-ear smile. He’s thoughtful. Perhaps a little too young to be called ‘wise’, but will likely earn that distinction before he’s grey. He’s inordinately busy for his age - doing what he feels he needs to be doing.

“I think my heart is to speak for my people,” he said. “Kinship is really hardwired into my brain and my values. I think that’s one of the reasons I ran for (USSU President). The sense of community, and having supports here that represent all.”

Much of his motivation, and perhaps his sense of servitude, comes from his great-grandfather, Edward Baldhead, who served in the second World War. Baldhead says his great-grandfather had a passion for teaching and sharing his wisdom, but always in a way that full of enthusiasm and life despite the challenges he faced.

“He didn’t have to serve, but he was happy to serve his country. Yet, all these terrible things happen, like residential schools, the Indian Act, veterans not being paid or recognized when they came back from war – especially Indigenous people,” said Baldhead. “How hopeful, happy, generous – all these great values (the veterans) hold, and how empowering they can be. They didn’t have to go to war, it was their choice. We signed a treaty and we’re honouring it. It shows how high we hold our treaties…he had humility and those were the values he was sure to pass on.”

Those values seem to resonate with purpose in Edward’s great-grandson. Along with Darian Lonechild, has served as FSIN Youth Representative for about six months, using the position to push for culture camps, language revitalization, and other opportunities for youth to explore traditional ways of knowing.

“This is amazing knowledge that needs to be in our schools. This is what I’m bringing to the USSU – how to walk perfectly in both worlds with balance,” said Baldhead. “One thing I will definitely take from FSIN and apply here (at the U of S) is how to treat everyone like a relative.”

In his newest role – President of the USSU – Baldhead is responsible to represent students’ voice at the U of S, and as such, wants build stronger relationships with minority voices on campus. He said that the efforts the U of S has put into Indigenization could continue to be improved, at the campus strives to be a more inclusive place.

“One of my main goals is mental health and having Indigenous knowledge being valued as equal to westernized education,” he said. “We want to build a strategic plan that encompasses everyone, that will educate everyone on the importance of Indigenous and oral history.”

As a public leader in two very influential provincial institutions, Baldhead’s commitment to education and his people has certainly changed from his teenage years of being in and out of school.

“This turned for me in grade 12. I had to do grade 12 twice. I knew then that I had to go to school, because that grade four teacher always stuck in my mind.”

When asked about his personal future plans, Baldhead simply smiles and said “wait and see.” But his priorities are in the right place. Much like his great-grandfather, he believes his responsibility is serve in the best way he can.

“I don’t see what I’m doing as leadership. I see it as a servant job. I’m not here to stand in front of anybody, I’m here to serve,” said Baldhead. “My goal is to set my goals so high that I’ll never reach them. That way I stay humble.”