Op-ed: Holding the education system accountable for my daughter

April 2nd is known as world autism awareness day and an annual event called “Light It Up Blue” is celebrated worldwide. Every year, I single-handedly organize the Light It Up Blue event in Regina. It was also the day that I broke my silence.

I spoke honestly and openly about a situation that my daughter Sharlize is currently experiencing. I broke the news during my media scrums at the event. Before it went public on the evening news, I shared it on my Facebook page to my friends and family. 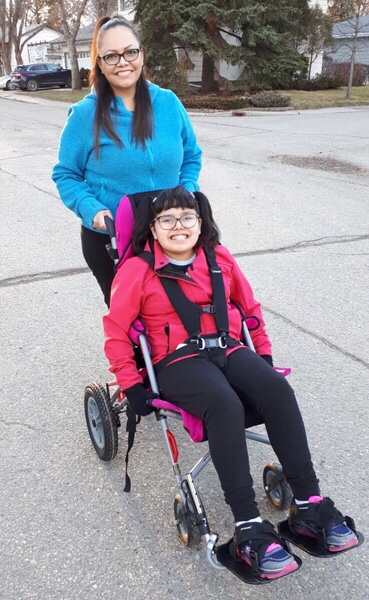 Jeanelle with her daughter, Sharlize.

The day before the Light It Up Blue event, I was informed that my daughter’s former school Jack Mackenzie has asked me to explore the option to transfer her out to a new school due to her continuous meltdowns which resulted in numerous incident reports. At Jack Mackenzie school, my daughter was a student in the Complex Needs Program which was initially designed for challenged autistic students like Sharlize.

On Monday, April 1st, I received a phone call from the Regina Public School Superintendent Morgan Reed who oversees Jack Mackenzie school. She called to discuss an option with me. Morgan asked if I can look into sending Sharlize to a new school here in Regina who can handle Sharlize and take her on full days and she said I had until tomorrow to give my answer. I felt the pressure but said I couldn’t give an answer without knowing anything about the new school or discussing why this decided without my consent.

Morgan stated the new school will take my daughter on for full days as her days at Jack Mackenzie were cut into half days since February due to the amount of meltdowns she had.

I was informed that I had a time limit of when to comply my answer. If I didn’t answer soon or if I didn’t say yes to the offer, the new school would give the open spot to another student. Then Sharlize would have to remain at Jack Mackenzie with half days. Eventually, if anymore meltdowns occurred that led to more incident reports, Sharlize would be given a medical exclusion. Then she would be left with no education. The other option that was presented at the meeting was to sign Section 9 which is giving up my parental rights to Sharlize. I was mad and hurt. This couldn’t be a positive option for my daughter and myself. I was angry that this option was even discussed.

Since September, I have formed a huge support team that met biweekly to a monthly basis. We have planned to put appropriate supports in place to manage and alleviate some of my daughter’s meltdowns in school.

Some members of the team had even suggested to implement a private one on one EA to work exclusively with Sharlize through Jordan’s Principle funding. Everyone thought this was a great idea but the school and school board said no.

Just like that, our collaborated suggestion was brushed to the side. The decisions involving what they think is best for my daughter’s education were all decided by the Regina Public Schools.

I sat at the table with the representatives from the ministry of education, health and social services regarding the issue of Sharlize’s meltdowns for months. I thought my voice was being heard but surprisingly, it wasn't.

On the night of February 10th, the principal at Jack Mackenzie texted me asking if I could meet with him and Morgan the following morning at the school to discuss a plan going forward with Sharlize. Our regular team meeting was scheduled that day in the afternoon. I was nervous why they wanted to meet prior to the big meeting. I questioned the intention of the meeting and that I feared the worst, however, the principal reassured me it was great news and there was nothing to worry about. So, I took his word. The moment I sat down in that meeting, Morgan said, “I’m just going to come out with it, we are cutting Sharlize’s school hours into half.” I was in shock as I did not expect that at all. I felt like I was lied to and brought to the meeting under false pretenses as the principal said it was great news. It was great news for them but not for me.

I was given no choice but to accept this.

The last week of February is when she started half days. The half days were proposed to be temporary until the meltdowns subsided.

Fast forward to the following morning after my Light It Up Blue event, I was getting my daughter ready for school with a heavy heart knowing her presence wasn’t wanted there anymore. Questions filled my head. How could they not want to work with my daughter anymore? Wasn’t this new “Complex Needs Program” designed to work with challenged students like Sharlize?

I was given that impression when I met with a worker from the Regina Public School Board last June who discussed taking Sharlize out of her previous school at Lakeview to transition into this newly formed program called the Complex Needs Program.

I expressed disappointment in this meeting because I was being informed of this decision without being present at the decision-making table. I was promised from that point forward that the Regina Public School board will make it their mission to make the decisions more inclusive. I believed her.

The idea of applying for funding through Jordan’s Principle for an educational assistant to work specifically with Sharlize at Jack Mackenzie was denied by the school and school board.

On April 5th, I met with the new school. It's not appealing at all and I had mistaken it for a storage building. There's no playground. No gym. It's secluded and hidden. The staff were transparent with me and admitted that they use physical restraints on the students when needed. The restraint looks like a police hold.

How is that right? I don't even use this to my own child.

Accepting the new school offer was a forced decision. This is what I am forced to accept. I am not happy with this at all.

On April 8th, I received a call from Morgan who wanted to discuss her view of misinformation in the media reports, as she claimed. She denied everything. She also denied asking me on April 1st during our phone conversation that I had until the next day to comply my answer on accepting this new school or not. She denied it and I was shocked that she lied to me.

Morgan suggested to keep working with Sharlize at Jack Mackenzie school which was never an option from that meeting or in our phone conversation.

This is the reality my daughter and I are facing. This is not what I wanted to expose them. All I want is for my daughter to have an education!

I had no choice but to send my daughter to the last resort school that uses physical restraints on the students during meltdowns. I have received a few messages since she started at the new school that Sharlize had meltdowns. I questioned whether they had her in a restraint during those crisis times. Imagine the anxiety and the paranoia I have wondering if they have their hands on my daughter.

I want a change in the education system, for not only my daughter, but all those children who are being denied a proper and equitable education due to having a disability.

On April 8th, the provincial ministry of education put out a media release seeking input from Saskatchewanians on how to better the education system by answering an online survey which closes on May 4th. I feel this report would be beneficial to help families across the province by advocating their voices. When introducing and implementing certain programs such as the Complex Needs program that my daughter was in, requesting a student to transfer out to a different school isn’t the answer. This doesn’t help a student to develop. If anything, transitioning complicates life for the child and their families. Strategies must be developed and collaborated through teams like the one I built from my community supports. Denying access to Jordan’s Principle funding shouldn’t happen either. When Regina Public Schools welcomed reconciliation into their schools, the community believes in the school and their intent of bridging the gap.

Using physical force and restraints on the students should not be an option for any school at all. This reverts back to the patterns of residential schools where physical force was part of the norm back then, when in reality it shouldn’t have been. Don’t repeat historical traumas to our children. I want my daughter to receive a good education here in Regina – a city we now call home. I am holding the education system accountable with hopes of making this right and collaborating together to find achievable answers for a better outcome.