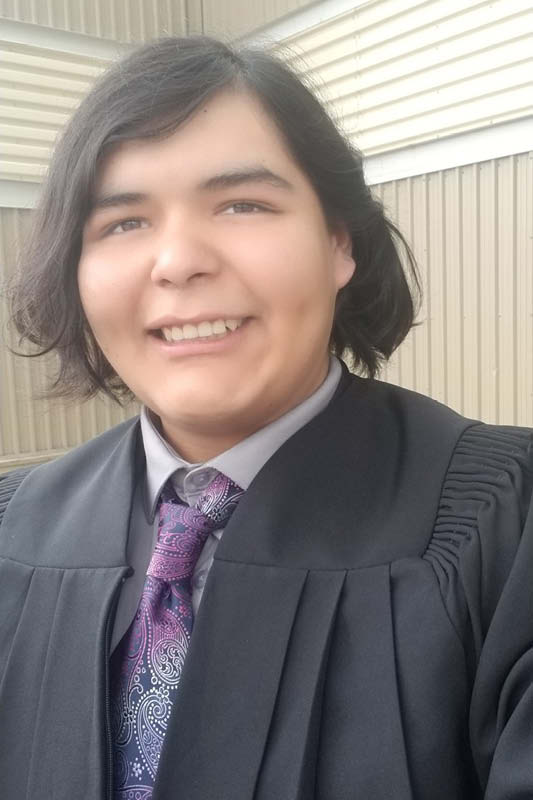 Formally speaking, a valedictorian is often the student with the highest ranking among their graduating class. But in its more colloquial application, the valedictorian is commonly chosen by his or her peers as the student who has accumulated highest social credit – not popularity, necessarily – but goodwill amongst their peers.

“I think my classmates chose me because I was friendly to everyone. I tried my best not to make any enemies. I want to be a person on neutral ground with every circle,” said Gamble.

Gamble, 21, from Beardy’s and Okemasis Cree Nation, said how overwhelmed he was, not only to graduate, but to represent his class as valedictorian. The path to get there wasn’t without its obstacles, he said. Gamble took a few extra years to graduate, struggling with one of his biological parents who regularly discouraged him, as well as some weight issues.

As such, Gamble’s valedictorian address, which was recorded in the Oskayak gymnasium and sent out remotely to his classmates, centred on perseverance.

This spirit of community and enthusiasm was recognized by the school staff too. Guidance councillor David O’Soup said Gamble’s kindness made him a perfect choice to represent his class.

“He represents the students well. He’s at the forefront of a lot of school activities. Naturally, as an actor, he’s bold and courageous. He’d often be front and centre of any sort of school gathering, and always presented himself well.”

O’Soup said that students now are often growing up quiet and afraid to share their voices.

“Dante is not one of those kids. He’s a natural leader, and not afraid to make his opinion known.”

Now that Gamble has put a feather in the cap of his high school career, he’s tentatively thinking about pursuing acting. He has done voice acting work, performed in a short film, and acted in several stage plays and musicals.

“I got into acting because I really like seeing people smile. I like being a part of that joy,” he said.