Partnership sees Indigenous student leadership opportunities at U of S

A new partnership between the University of Saskatchewan (U of S) and the Saskatoon Tribal Council (STC) commits to improving educational successes and opportunities for Indigenous students in Saskatchewan.

A Memorandum of Understanding (MOU), honouring treaty relationships and the Truth and Reconciliation (TRC) Calls to Action, was signed in Saskatoon on Thursday by STC Chief Mark Arcand, U of S President Peter Stoicheff, and Chiefs from the seven member STC First Nations. The collaboration will enable the U of S to support STC's goal of educational attainment and economic development for First Nations people.

“We want to focus on education, and through this partnership, to move the needle to push our students to really get that quality of education so they don’t have to depend on systems,” said Arcand. “We want to look at the opportunities to enhance education at a very young age so these children can potentially go to their university at home, which is the University of Saskatchewan.” 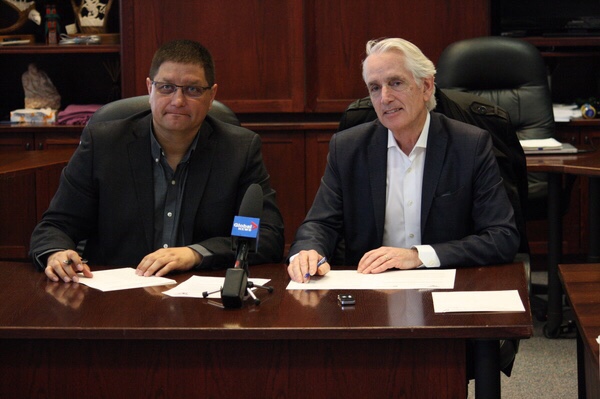 According to a release, the agreement also outlines leadership and mentorship opportunities for Indigenous students at the U of S.

Stoicheff said that everything they do at the U of S is to prepare the students to be engaged global citizens.

There are currently 25,000 students at the U of S, approximately 15% of which, or 3100, self-identify as Indigenous. Stoicheff said that he believes about 30% of those Indigenous students come from the STC regions.

“The numbers don’t tell the story, but we wouldn’t have a story to tell if we didn’t have the numbers,” said Stoicheff.

Arcand echoed Stoicheff’s statements, saying its time to start investing in young people to bump the numbers up of Indigenous students attending the U of S. He said STC has already begun some programs to help young people become acclimated with the university.

“We're bringing ten-year-olds to campus to let them know it’s a safe place to come, it’s a place they can have a quality of life,” he said. “Let’s start engaging at a younger age so they can be excited about being on the university campus.”